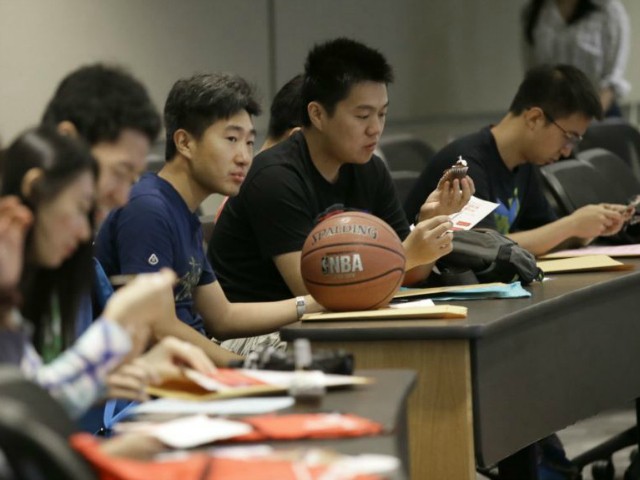 The U.S. ambassador to China has temporarily blocked a proposal by White House aide Stephen Miller to “make it impossible” for Chinese citizens to study in the United States, according to the Financial Times.

The report, which includes a description of the meeting where President Donald Trump sided with Ambassador Terry Branstad, also warns that Trump may develop alternative reforms amid the growing worries about the Chinese government’s determined theft of U.S. commercial secrets and scientific discoveries.

The theft is greatly helped by many American executives and laboratory directors who cut their payroll costs by sidelining Americans graduates while hiring cheap Chinese software programmers, scientists and laboratory technicians.

According to the report by the Financial Times:

As the administration debated ways to tackle Chinese espionage, Stephen Miller, a White House aide who has been pivotal in developing the administration’s hardline immigration policies, pushed the president and other officials to make it impossible for Chinese citizens to study in the US, according to three people familiar with internal discussions.

The report, likely leaked by Branstad or his aides, continued:

According to the three people familiar with the discussions, ahead of the Oval Office meeting Mr Branstad argued that Mr Miller’s plan would take a much bigger toll on smaller colleges, including in Iowa, than on wealthy Ivy League universities.

Mr Branstad succeeded in convincing the president that Mr Miller’s proposal was too draconian, according to one person familiar with the White House showdown. At one point, Mr Trump looked at his ambassador and quipped: “Not everyone can go to Harvard or Princeton, right Terry?”

The article claims that Miller wants to “make it impossible” for Chinese students to study in the United States. That claim is implausible because many of the Chinese students pose no economic or security threat.

Branstad’s temporary win leaves plenty of room for Trump to reform the employment rules. For example, reforms could ensure that science laboratories hire fewer of the Chinese graduates who steal commercial and military technology for later development in China, and who also displace U.S. students from science careers.

But any reforms will face tough resistance from business groups and laboratory directors who want to be able to hire the smartest Chinese graduates and also cut their labor costs, without regard to the long-term impact on the American science base.

Many Chinese are allowed to work in the United States via rules for postgraduate students and the H-1B and L-1 visa worker programs.

The growing concern with Chinese theft is highlighted in Trump’s December 2017 National Security Strategy, which says:

Every year, competitors such as China steal U.S. intellectual property valued at hundreds of billions of dollars. Stealing proprietary technology and early-stage ideas allows competitors to unfairly tap into the innovation of free societies. Over the years, rivals have used sophisticated means to weaken our businesses and our economy as facets of cyber-enabled economic warfare and other malicious activities. In addition to these illegal means, some actors use largely legitimate, legal transfers and relationships to gain access to fields, experts, and trusted foundries that fill their capability gaps and erode America’s long-term competitive advantages.

We must defend our National Securi Innovation Base (NSIB) against competitors. The NSIB is the American network of knowledge, capabilities, and people—including academia, National Laboratories, and the private sector—that turns ideas into innovations, transforms discoveries into successful commercial products and companies, and protects and enhances the American way of life. e genius of creative Americans, and the free system that enables them, is critical to American security and prosperity.

Protecting the NSIB requires a domestic and international response beyond the scope of any individual company, industry, university, or government agency. The landscape of innovation does not divide neatly into sectors. Technologies that are part of most weapon systems often originate in diverse businesses as well as in universities and colleges. Losing our innovation and technological edge would have far-reaching negative implications for American prosperity and power.

PROTECT INTELLECTUAL PROPERTY: The United States will reduce the illicit appropriation of U.S. public and private sector technology and technical knowledge by hostile foreign competitors. While maintaining an investor-friendly climate, this Administration will work with the Congress to strengthen the Committee on Foreign Investment in the United States (CFIUS) to ensure it addresses current and future national security risks. The United States will prioritize counterintelligence and law enforcement activities to curtail intellectual property theft by all sources and will explore new legal and regulatory mechanisms to prevent and prosecute violations.

TIGHTEN VISA PROCEDURES: The United States will review visa procedures to reduce economic theft by non-traditional intelligence collectors. We will consider restrictions on foreign STEM students from designated countries to ensure that intellectual property is not transferred to our competitors, while acknowledging the importance of recruiting the most advanced technical workforce to the United States.