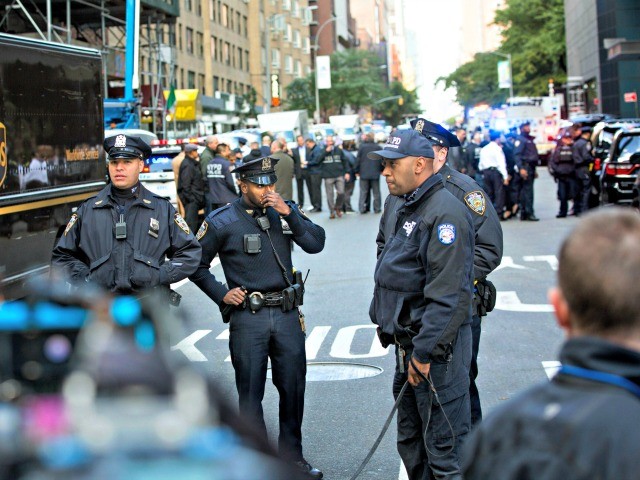 Update: The NYPD has given an “all clear” after New York City’s Time Warner Center in Columbus Circle was evacuated for the second day in a row after two suspicious packages were discovered. Breitbart News’ original report is below.

LATEST: “No threat or danger,” according to NYPD, after unattended packages prompt evacuation of shops and restaurants at the Time Warner Center in New York, the same complex that houses CNN. https://t.co/plt4Z7TspE pic.twitter.com/2zlWUI5itK

ALL CLEAR at TIME WARNER CENTER NYPD Saying 2 gift wrapped packages kids toys inside found on a trash can near an escalator and the 3rd floor ⁦@NBCNews⁩ ⁦@MSNBC⁩ pic.twitter.com/QIzdF7ag4X

The Time Warner Center in Columbus Circle is under evacuation Thursday evening after the law enforcement was alerted to suspicious packages found on the premises, according to several emerging reports.

According to the NYPD, officers partly evacuated the building as a precaution after two unattended packages were found.

As a precaution, the NYPD is currently evaluating a pair of unattended packages at the Time Warner Center Mall, Columbus Circle in Manhattan. More information will be released as it becomes available. pic.twitter.com/VqrzHZJ6zv

Photos from the scene have begun circulating on social media.

Building is quietly being evacuated by NYPD top to bottom. pic.twitter.com/CvmouyDkLf

Pano of front entrance. Not quite mass chaos but definitely mass confusion as the building is not fully swept. pic.twitter.com/wilg5HQGfs

what a time to be alive. pic.twitter.com/XtVxTlFbWW

The event comes one day after CNN, a Time Warner Center tenant, was evacuated due to the discovery of a suspected crude pipe bomb addressed to former CIA chief John Brennan.

Investigators are searching coast-to-coast Thursday for the culprit and motives behind the bizarre mail-bomb plot aimed prominent Democrat Party members and others.

Three more devices were linked to the plot — two addressed to former Vice President Joe Biden and one to actor Robert De Niro — bringing the total to 10 in an outbreak of politically loaded menace with little if any precedent. Authorities warned there might well be more.