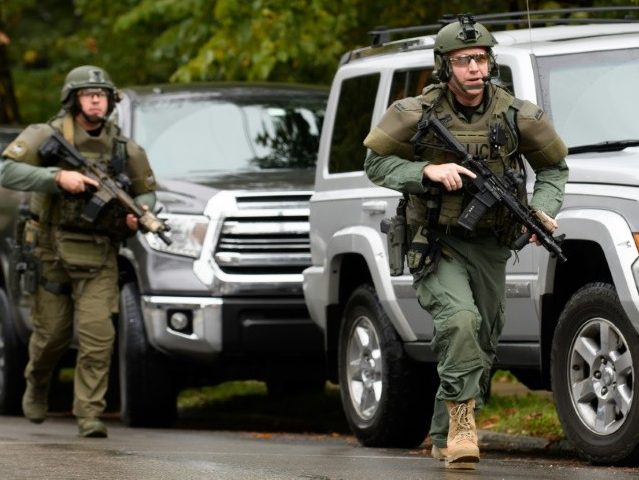 CNN reports that the Tree of Life Synagogue shooting suspect has a “license to carry a firearm.”

ABC News reports that the suspect, Robert Bowers, “has several firearms and hunting licenses registered in his name.”

Breitbart News reported that Bowers allegedly opened fire inside the Pittsburgh synagogue and killed at least 11 people. He also wounded four police officers who arrived on scene after 911 calls about the shooting.

CNN’s report that Bowers has a license to carry means he passed a background check, to acquire the license. And it also means he would have been able to legally purchase firearms.

In fact, a law enforcement source told CNN that Bowers “has made at least six known firearm purchases since 1996.”

The gunman allegedly used multiple firearms in the attack. NY Mag reports that he had a rifle and KDKA’s Ross Guidotti reported Bowers had handguns as well:

Suspect surrenders with pistol in his waist band and one strapped to his ankle. Swat operators grabbed Weapons removed and made safe

This is yet another example of the dangers of gun free zones. If you have a crazy guy with a gun or a knife or a bomb coming to kill people, then the potential victims need the ability to fight back.

Cops carry guns to protect cops. They carry guns for officer safety first and foremost. Since ordinary Americans who are not cops virtually always encounter the bad guys first (before the so called first responders), it is critical that Americans undertake steps to protect themselves—don’t count on government to do it for you. Remember, you are your own first responder.