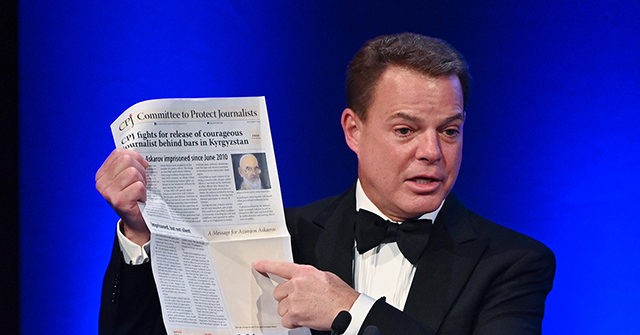 Former Fox News Channel anchor Shep Smith, known for his critical coverage of the Trump administration, has spoken with MSNBC brass about a possible job at the leftwing news network as it considerings a shakeup, according to a report.

MSNBC talent and staffers are bracing for a major 2020 shakeup amid discussion of moving ratings-challenged Chuck Todd to a morning slot and execs talking with Fox News escapee Shepard Smith.

The goal of any reshuffle would be to shed ratings dead weight in the lead-up to the election. Sources at the network cautioned that a new look for the lineup is still up in the air, but brass have been batting around several options.

One of those is new blood in the form of Smith, who abruptly quit Fox late last year after on-air skirmishes with Tucker Carlson and other primetime hosts. Smith has had conversations with MSNBC President Phil Griffin about a potential gig when his non-compete clause expires, although his price tag is expected to be considerable for any interested network.

Speaking to the Daily Beast, one source said, “It’s unclear what slot he would take, but we’d want him in primetime.”

“We are well aware [Jeff] Zucker [president of CNN] is also pursuing him, as are a number of the networks,” the network insider added.

On October 11th, Smith announced on his weekday program Shepard Smith Reporting that he would be departing from the news network. Smith joined Fox News in 1996 and covered major breaking news stories for over two decades. He was the network’s chief news anchor and managing editor of its breaking news unit. As noted by the Daily Beast, days after Smith’s departure,  Zucker said he is “very open” to hiring the newsman and lauded him as “incredibly talented” and a “great journalist”

“I would be very open to talking to him,” Zucker told CNN chief media correspondent Brian Stelter during a fireside chat at the network’s CITIZEN forum.

Smith, who has maintained a low profile since leaving Fox News, delivered a speech before the 2019 International Press Freedom Awards in New York City in November in which he decried the “intimidation” of journalists.

“Intimidation and vilification of the press is now a global phenomena,” Smith said before taking a veiled jab at President Donald Trump. “We don’t have to look far for evidence of that.” He went on to say:

Our belief a decade ago that the online revolution would liberate us now seems a bit premature. Autocrats have learned how to use those same online tools to shore up their power. They flood the world of information with garbage and lies masquerading as news… There’s a phrase for that.

They dispatch troll armies after critical reporters, who are vilified and harassed. Their personal information – such as phone numbers, address, ID numbers – posted and published as an invitation for even more attacks.

In addition to his remarks, Smith also announced a personal donation of $500,000 to the Committee to Protect Journalists.