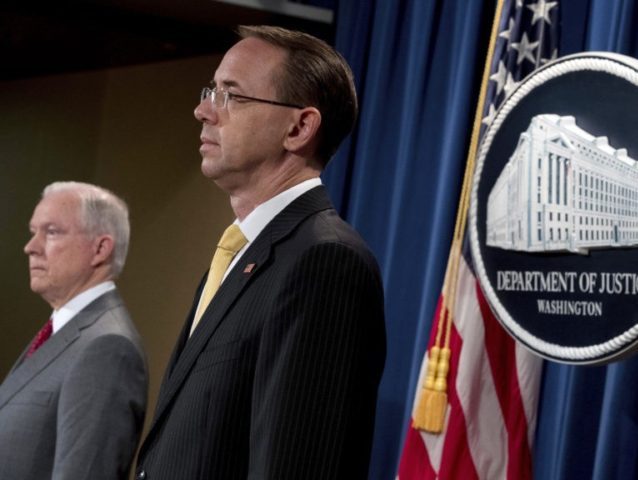 Deputy Attorney General Rod Rosenstein has verbally resigned to Chief of Staff John Kelly, according to a breaking news report.

On Friday, The New York Times published a bombshell report alleging Rosenstein raised the prospect during a meeting with multiple FBI officials of taping President Trump without his knowledge “to expose the chaos consuming the administration.” Further, the Deputy Attorney General considered using said recordings to lobby Chief of Staff John Kelly and Attorney General Jeff Sessions to invoke the 25th Amendment.

According to the report, Rosenstein became fixated with the idea of having the president removed after becoming frustrated with the White House’s handling of FBI Director James Comey’s firing. Rosenstein reportedly told close associates that he would one day be “vindicated” for being ordered to draft the memo justifying Comey’s ouster.

The Times says Rosenstein’s remarks were detailed in a series of memos compiled by multiple FBI officials, including former FBI Dupoty Director Andrew McCabe, a claim an attorney for the fired official denies. Michael R. Bromwich, a member of McCabe’s legal team, told the paper that his client “has no knowledge of how any member of the media obtained those memos.”

“A set of those memos remained at the F.B.I. at the time of his departure in late January 2018,” Bromwich added.

The Justice Department denied the report, issuing the following statement from Rosenstein to the Times: “I will not further comment on a story based on anonymous sources who are obviously biased against the department and are advancing their own personal agenda. But let me be clear about this: Based on my personal dealings with the president, there is no basis to invoke the 25th Amendment.”

A Justice Department spokesperson conceded that Rosenstein did discuss secretly taping the president but presented an anonymous source who told the Times that he did so in a sarcastic manner.

Allies of the president, including Fox News host Sean Hannity, warned against firing Rosenstein — a move they say could have a negative impact on the fast-approaching midterm elections.

Washington Post national political reporter Robert Costa said over the weekend that the president would not fire Rosenstein over the report. “POTUS has told several people on Fri. and Sat. that he’s not going to fire the deputy AG and is suspicious of anything that even tangentially involves McCabe, according to three advisers familiar with the ongoing discussions,” he tweeted.