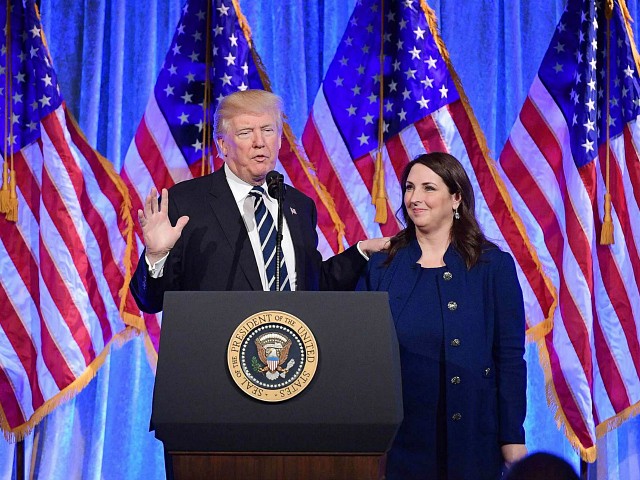 The job of Republican National Committee (RNC) Chair is Ronna McDaniel’s for another two years if she is up for it. President Donald Trump has asked the high-ranking party official to serve a second term amid a stellar fundraising haul for the 2018 midterm elections, according to a Sunday Axios report

Axios co-founder Mike Allen writes that President Trump is thrilled with McDaniel’s “work on behalf of the America First agenda, effective management of the party infrastructure, and record grassroots engagement and fundraising.”

President Trump’s offer comes after the RNC’s August filings showed the party raised $16.4 million for the month, bringing this cyle’s total to a whopping $252 million. “Enthusiasm for President Trump and his successful agenda is fueling our record-breaking fundraising and energizing our grassroots supporters,” McDaniel told The Hill of the record-breaking fundraising haul.

“The generic ballot has narrowed from double digits. Now it’s at seven. I’m looking at every race across the country,” the RNC chair told Fox News host Chris Wallace last Sunday. “We have about 30 that are in the margin of error, certainly in districts where Hillary Clinton won where we have Republican incumbents. Our job is to turn out our base first. Our base is completely energized right now. The Kavanaugh hearings have just highlighted how important this election is for them.”