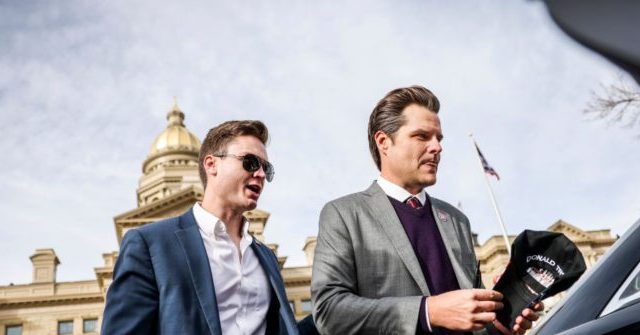 Rep. Matt Gaetz (R-FL) said he has no plans to resign after the Hill reported he is being investigated by the Department of Justice (DOJ) due to allegations regarding an inappropriate relationship with a minor and violation of sex trafficking laws.

The Republican said in a text exchange with the Hill, “plans to resign from his office are ‘false’ and it is ‘very safe to say he doesn’t have any intention to do so,’” Gaetz said Friday.

In March, the New York Times first reported Gaetz was under federal investigation for his sexual activity with women and a potential relationship with a 17-year-old girl.

Gaetz took to Twitter that same day to fend off the allegations, and to shed light on what he deemed “an organized criminal extortion involving a former DOJ official seeking $25 million while threatening to smear my name.”

Gaetz also said he has “been cooperating with federal authorities in this matter,” telling his Twitter followers that his “father has even been wearing a wire at the FBI’s direction to catch these criminals.”

He also reiterated that “no part of the allegations against me are true, and the people pushing these lies are targets of the ongoing extortion investigation.”

“I demand the DOJ immediately release the tapes, made at their direction, which implicate their former colleague in crimes against me based on false allegations,” Gaetz concluded in another tweet.

On Tuesday, Gaetz responded to allegations on Fox News Channel’s Tucker Carlson Tonight by denying the claims by calling them “a lie” and claimed it was part of an extortion scheme.

“It is a horrible allegation, and it is a lie,” Gaetz said. “The New York Times is running a story that I have traveled with a 17-year-old woman, and that is verifiably false. People can look at my travel records and see that that is not the case.”

House Minority Leader Kevin McCarthy (R-CA) said Wednesday on FNC’s America’s Newsroom if the allegations made against Gaetz’s come out to be true, he would then be removed from the House Judiciary Committee.

Gaetz’s communication director, Luke Ball, stepped down from his position Friday in the wake of the reports.