Could race be used as motivation in next month’s Florida gubernatorial election? According to an article by Steve Stewart of Tallahassee Reports, one organization appears to be trying it.

A group referring to itself as “Black Voters Matter” is using what Stewart called “race-baiting techniques” as a means to get out the vote for Tallahassee Mayor Andrew Gillum, Florida’s Democratic gubernatorial nominee, and Florida State Rep. Sean Shaw, the state’s Democratic nominee for state attorney general.

“[Tallahassee Reports] has recovered a text message sent to a potential Florida voter from a Black Voter Matters volunteer which refers to voting for Andrew Gillum as a way to end ‘Jim Crow FL!’” Stewart wrote.

In his report, Stewart offered a screenshot of the text message. 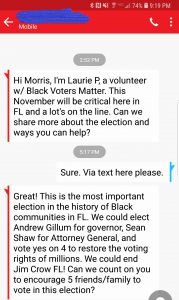