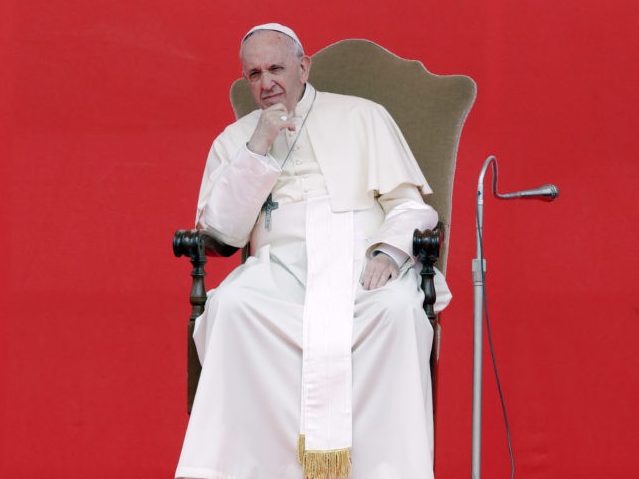 Pope Francis is finding it harder and harder to get by on trust alone as the faithful demand information and transparency, a report suggests.

Writing in the online Catholic news site Crux, veteran Vatican reporter John L. Allen Jr. stated Thursday that two major issues—the Vatican-China deal and the sex abuse crisis—showcase the need for Pope Francis to move beyond his tactic of silence in the face of problems with the expectation that people will simply “trust him.”

Francis is dealing with “two groups for whom a plea of ‘trust me’ from any Church leader, even him, is especially hard to swallow,” Allen notes, and moreover, “trust is a two-way street.”

“If Francis or any leader wants public trust, once in a while they have to be prepared to take the kinds of steps that earn it,” he said.

Chinese Catholics of the underground church who have suffered for their steadfast opposition to the Communist government out of fidelity to Rome “now feel like the rug has been pulled out from under them” as Francis has yielded to government demands for a role in the naming of Catholic bishops in the country, Allen said.

For the pope to tell Chinese Catholics to simply “trust him” without even revealing the terms of the new agreement is going a step too far, Allen suggests,

The pope’s handling of the China situation resembles the approach he has taken to the charges leveled against him a month ago by Italian Archbishop Carlo Maria Viganò, Allen says, in thinking that by saying nothing people will simply give him a pass.

Viganò, the former papal nuncio to the United States, has stated that Francis knew of Cardinal Theodore McCarrick’s serial homosexual abuse at least since 2013 and yet lifted sanctions against him, restoring him to a position of prominence in the Vatican.

“When those charges first arose,” Allen said, “Francis refused to address them, and essentially did so again Monday night during a new conference aboard his plane returning to Rome from a four-day trip in the Baltics.”

“Francis declined to respond to any question that wasn’t specifically related to the trip,” Allen added.

Moreover, “the pope didn’t say a word about Viganò’s allegations, nor did he answer the obvious question journalists aboard the plane really wanted to ask: Will he order the disclosure of records showing what the Vatican knew about the McCarrick case, and when it knew it?” Allen said.

The solution for the pope is to begin practicing what he has been preaching about transparency and accountability, Allen suggests.

“If Francis is looking for somewhere to begin right now, he might consider transparency – a word that’s been frequently invoked as a goal of his reforms, but a practice that sometimes seems more honored in the breach than the observance on his watch,” he wrote.

In practice, this means revealing to Chinese Catholics the content of the new deal he has made with the Chinese government, he said.

It also means a serious effort to get to the bottom of the McCarrick case, he added, something that the pope has shown little inclination to do thus far.

“Both on China and on sex abuse,” Allen concludes, transparency may be costly for Francis and his Vatican team, “but experience may prove that doing so is no longer a luxury but a necessity.”