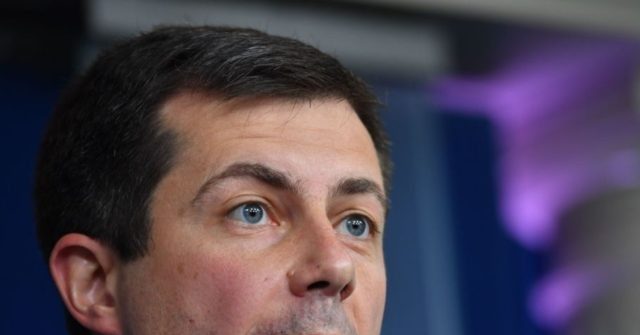 Real News Michiana (RNM) reported the current U.S. transportation secretary worked with Eli Cantu, a South Bend activist who admitted on Facebook that he joined the Chicago-based gang in 2006:

The relationship between the former mayor and gang member appears to have started to blossom after a South Bend police officer shot and killed Eric Logan on June 16th, 2019. Logan charged at the officer with a knife and the shooting was ruled to be justified. Despite the evidence showing a justified shooting, anti-police activists, criminals and known gang members used the incident to push their agenda and pull in national media. Buttigieg, who was running for president at the time, left the campaign trail and came back to South Bend where he joined in on marches and rallies, some of which were organized by Cantu.

The news site published a photo from the South Bend Tribune of Buttigieg standing near Cantu during a “gun violence memorial” protest. It referenced a CBS News story that quoted Cantu say he had met personally with the former mayor and “potential meetings are being planned with the mayor to help remedy the situation.”

The “situation” was how activists wanted Buttigieg to reform the department.

The killing disrupted Buttigieg’s campaign for president and the candidate’s response offended activists.

In June 2019, Buttigieg faced angry residents, and at one point, seemed to choke up when he was asked if “black lives matter:”

“He seemed to have already taken a side. It did seem that he was prioritizing who he thought was important, and it didn’t seem to be black people,” Melina Abdullah, a co-founder of the Los Angeles chapter of Black Lives Matter, told CNBC after participating in a July call with Buttigieg.

“I remember he felt very rushed, as if he wanted to check it off a box as something that he did,” she said.

More from Clifton French at RNM:

During that time, RNM has learned SBPD’s Strategic Focus Unit (formerly known as Street Crimes) was essentially put on the bench. Several officers, who wished not to be named due to fear of retaliation, say the special unit was not allowed to pursue the mission of the unit for months. While no officers have been able to confirm with RNM that Buttigieg himself ordered the police to stand-down, as mayor, Buttigieg was the executive of the police department. And, Buttigieg was actively meeting with convicted criminals and active gang members to discuss policing issues. The SFU, among other things, targets gangs and violent criminals.

French said he spoke to Buttigieg’s aides in 2019 about Cantu’s gang affiliation and “his staff didn’t seem surprised by the information being passed along.”