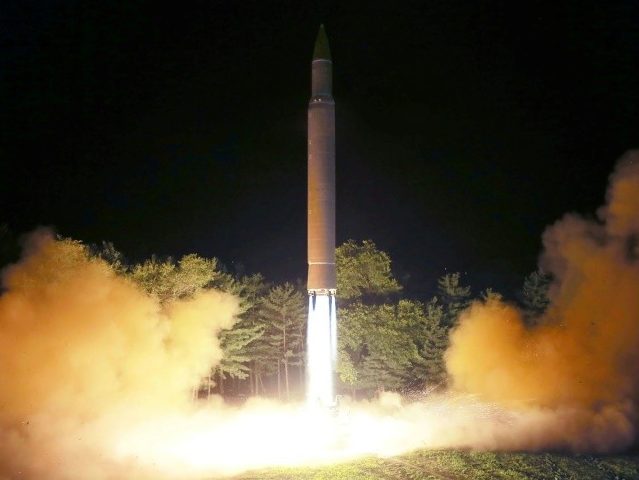 The report, published by CNN, reveals months of images of the Yeongjeo-dong missile base and a nearby unidentified site apparently under construction. American and South Korean authorities have long known of Yeongjeo-dong, though some suggest the lack of pause in its development is a sign that North Korea has no intention of ending its illegal nuclear program.

Yeongjeo-dong is not a nuclear site, however, mainly a missile base. The missiles may have both conventional and nuclear use.

Experts at the Middlebury Institute of International Studies at Monterey, who worked with CNN to analyze the images revealed Wednesday, concluded that North Korea has not only failed to shut down the known site, but that it “has significantly expanded a nearby facility that appears to be another missile base.” It remains unclear what the purpose of the second site is or whether it is operating as an extension of Yeongjeo-dong or an independent facility. The two sites appear around seven miles apart.

The CNN report is the latest in a series of similar revelations indicating that dictator Kim Jong-un has little interest in cutting military spending. Some did not necessarily originate in Western reports. In mid-November, for example, North Korea’s official Korean Central News Agency (KCNA) announced the development of a “newly-developed ultramodern” tactical weapon, without offering specifics on the type of weapon or its purpose other than “strengthening”

North Korea’s combat abilities. North Korea remains technically at war with South Korea, as neither side has signed a peace treaty. Active hostilities ended with an armistice agreement in 1950.

“The state-of-the-art weapon that has been long developed under the leadership of our party’s dynamic leadership has a meaning of completely safeguarding our territory and significantly improving the combat power of our people’s army,” KCNA asserted. “The testing of the high-tech tactical weapon has been carried out successfully, meeting all superior and powerful designing indicators.”

Most of the revelations surrounding the North Korean military have been more akin to the CNN report than the KCNA one. Last month, the U.S.-based monitor site 38 North reported that Pyongyang had appeared to make no proactive moves towards dismantling another key missile site, Dongchang-ri, a violation of an explicit North Korean promise to do so.

Similarly, in October, the Heritage Foundation warned that North Korea had “increased production of fissile material for nuclear weapons, and satellite imagery showed upgrades to missile, reentry vehicle, missile launcher, and nuclear weapon production facilities.” While long-range ballistic missiles may threaten the United States, they are a guaranteed menace to U.S. allies like Japan and North Korea, and may also alarm the Chinese government, whose territory falls well within range of a misfire.

North Korea is currently operating under an unprecedentedly rigorous international sanctions regime whose lifting is contingent upon Pyongyang provably and irreversibly dismantling its nuclear weapons program. South Korean officials believe the North to be in possession of as many as 60 illegally manufactured nuclear weapons. Kim Jong-un has argued that North Korea deserves an end to sanctions because it has taken steps to dismantle the program, most prominently the staging of an explosion at the door of the Punggye-ri Nuclear Test Site, home to all of the state’s illegal nuclear weapons test. Many experts dismissed the Punggye-ri explosion as a stunt, suspecting that the country’s latest nuclear test in 2017 irreparably destroyed the site. A recent report in the journal Seismological Research Letters concluded this to be the case, finding evidence that the latest test collapsed a nearly 300-foot “void” in Mount Mantap, where the site is located, threatening the destruction of the mountain itself in the event of another detonation.

Others have argued that North Korea cannot enjoy an end to sanctions because it has failed to abide by them. This week, the South Korean newspaper Chosun Ilbo, citing Radio Free Asia, reported that China has contributed greatly to helping North Korea survive the sanctions and that trade has “revived” on their mutual border.

“Exports of North Korean iron ore, which are banned under UN Security Council sanctions, flow freely to China through the border city of Dandong, Radio Free Asia reported on Tuesday,” the newspaper noted. “Traders smuggle them through customs hidden in 50 kg burlap sacks. North Korean seafood is also widely sold at markets in Dandong despite a UNSC ban, according to RFA.”