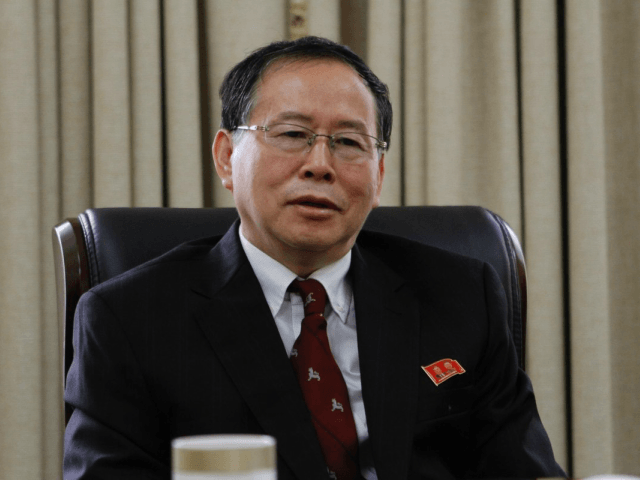 North Korea has reportedly dispatched Han Song-ryol, vice foreign minister and one of that country’s most experienced negotiators, to a labor camp along with five other top officials for the crime of “breaching doctrine” by suggesting innovative tactics for breaking the diplomatic stalemate with the United States.

South Korea’s Chosun Ilbo determined on Tuesday the vice foreign minister was sacked in September – or, as an anonymous government source put it, “there were significant changes in Han Song-ryol’s status.”

Han’s status changed to “slave worker in one of North Korea’s most notorious forced labor camps.” His re-education curriculum reportedly includes swinging a pick in South Hamgyong province’s Komdok mine. A North Korean defector told Chosun Ilbo that Komdok miners generally come home with “serious physical impairments,” if they come home at all. The prospects for a 65-year-old veteran diplomat look grim.

“Being sent to the Komdok mine is the harshest of reeducation sentences and means he just escaped being sent to a concentration camp,” the defector said.

Han’s fall from grace was quite sudden. As Chosun Ilbo pointed out, he was named as one of the top seven North Korean Foreign Ministry officials in the 2019 edition of “Who’s Who in North Korea,” a publication of Seoul’s Unification Ministry. He was North Korea’s deputy chief of mission at the United Nations from 2002 to 2006 and assumed leadership of the Foreign Ministry’s U.S. affairs department in 2015.

Han has not been seen publicly since making a trip to Sweden last January, during which he discussed the possible release of U.S. citizens imprisoned by North Korea, so he might have gotten in trouble well before his official “status change” in September.

Han apparently came under suspicion for growing a bit too fond of America. He made certain his daughter was educated in the United States, with some help from South Koreans living in the U.S. When an American friend asked during his U.N. days who he respected most in the world, Han allegedly replied with the name of a certain famed businessman and reality-show host who would relocate from New York City to Washington, DC, a decade later.

Conflicting theories have been floated for why the North Korean regime turned against Han. The semi-official reason, as one of Chosun Ilbo’s sources put it: “It seems a proposal for U.S.-North Korea talks he submitted to North Korean leader Kim Jong-un was criticized for breaching doctrine.”

The Washington Times cited sources on Wednesday who said the precise reasons for Han’s removal from the denuclearization equation are “unclear,” but it might not be a result of excessive sympathy for the American position. On the contrary, Han and other top officials have supposedly been purged because they criticized dictator Kim Jong-un for “being played” by the United States.

Chosun Ilbo suggested Han was a belated casualty of the power struggle that ended with Kim’s influential Uncle Jang getting shredded by an anti-aircraft gun in 2013:

Thae Yong-ho, North Korea’s deputy ambassador to the U.K. before defecting to South Korea in 2016, said in an interview with the North Korea Strategy Center in February 2017, “The father of Han Song-ryol’s son-in-law was purged because he was close to [former North Korean eminence grise] Jang Song-taek, while Han’s son-in-law and grandson were sent to political prison camps.” That suggests a purge targeting Jang loyalists continues.

Another source said, “Since Ri Su-yong, a vice chairman of the Workers Party Central Committee, was promoted to foreign minister, officials who were loyal to former vice premier Kang Sok-ju have been phased out. In the process, factional feuding erupted at the Foreign Ministry and Han Song-ryol, who was loyal to Kang, got caught up in it.”

Also gone from this year’s Who’s Who is Pak Kil-yon (76), who served as permanent representative to the UN from 2001 to 2008 and later vice foreign minister. Pak was also seen as loyal to Kang.

According to Secretary of State Mike Pompeo on Wednesday, advance planning is currently underway for a second summit between President Donald Trump and Kim Jong-un sometime in February.