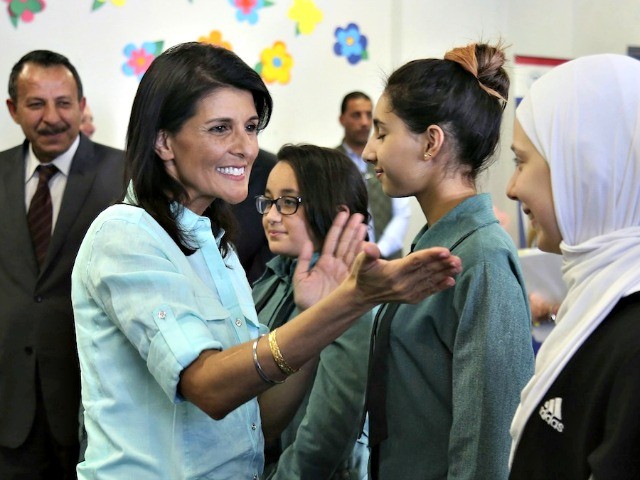 United Nations (U.N.) Ambassador Nikki Haley had to be excluded from a White House meeting on the number of refugees the United States will admit next year due to her pro-immigration views.

According to sources who spoke with NBC News, President Trump’s senior adviser Stephen Miller set up a meeting to discuss where the administration would set the refugee resettlement cap for next year. Ultimately, as Breitbart News reported,  Trump reduced the refugee cap to 30,000 total admissions, which is solely a cap, not a target for the administration to reach.

Haley, the sources said, was specifically excluded from the meeting on the refugee resettlement program because of her known pro-immigration viewpoints. Defense Secretary James Mattis and Secretary of State Mike Pompeo argued against reducing the inflow of refugees, despite Trump’s long-held promise to cut immigration to the country.

While visiting India in July, Haley said America was founded as a “nation of immigrants” with “multiple cultures” and “multiple populations,” calling the multicultural worldview the “fabric of America.”

Nikki Haley in India: “America is a country of immigrants. It’s the fabric of America to have multiple cultures. Multiple populations. Multiple heritages that do come into America that make it what it is.” https://t.co/qU3lpFmM43

“The one thing about America and what I have always loved is America is a country of immigrants,” Haley said. “It’s the fabric of America to have multiple cultures. Multiple populations. Multiple heritages that do come into America that make it what it is.”

Additionally, before being hand-picked by Haley to join her in the Trump administration, Lerner helped create and launch Mark Zuckerberg’s open borders lobbying group, FWD.us.

Despite pushback from administration officials, Trump has successfully reduced the inflow of foreign refugees to the U.S. This year, the country is on track to admit less than 22,000 refugees.