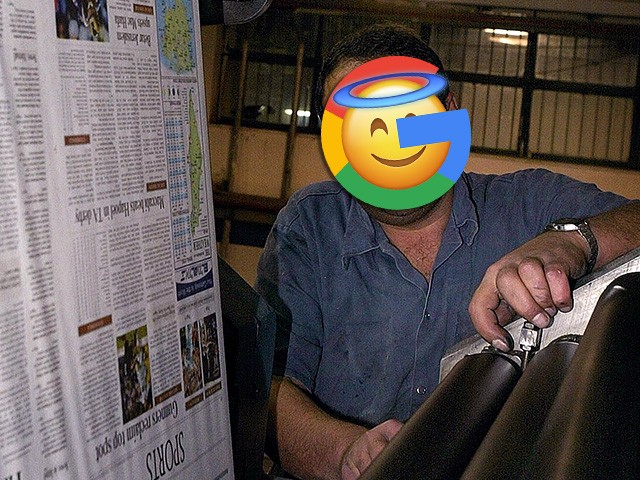 The New York Times writes in a recent article that a new study shows that Google made approximately $4.7 billion from the News industry in 2018. The News Media Alliance, which represents 2,000 newspapers, believes that journalists deserve a cut from the Masters of the Universe.

In an article titled “Google Made $4.7 Billion From the News Industry in 2018, Study Says,” the New York Times states that a new study from the News Media Alliance has estimated that Google made $4.7 billion from the News industry last year. The president and chief executive of the alliance, which represents 2,0000 newspapers across the country, has now claimed that journalists deserve a cut of that $4.7 billion.

It’s more than the combined ticket sales of the last two “Avengers” movies. It’s more than what virtually any professional sports team is worth. And it’s the amount that Google made from the work of news publishers in 2018 via search and Google News, according to a study to be released on Monday by the News Media Alliance.

The journalists who create that content deserve a cut of that $4.7 billion, said David Chavern, the president and chief executive of the alliance, which represents more than 2,000 newspapers across the country, including The New York Times.

“They make money off this arrangement,” Mr. Chavern said, “and there needs to be a better outcome for news publishers.”

That $4.7 billion is nearly as much as the $5.1 billion brought in by the United States news industry as a whole from digital advertising last year — and the News Media Alliance cautioned that its estimate for Google’s income was conservative. For one thing, it does not count the value of the personal data the company collects on consumers every time they click on an article like this one.

Terrance C.Z. Egger, the chief executive of Philadelphia Inquirer PBC, told the Times: “The study blatantly illustrates what we all know so clearly and so painfully. The current dynamics in the relationships between the platforms and our industry are devastating.” The study by the alliance has been made public ahead of the House subcommittee hearing on Tuesday on the relationship between Silicon Valley tech firms and the media. But Google has taken issue with some of the report’s findings:

Google contested the study’s findings, which were disputed in several posts on Twitter. “These back-of-the envelope calculations are inaccurate,” the company said in statement, adding that “the overwhelming number of news queries do not show ads.” The company said Google news and search sends over 10 billion clicks to publishers’ websites each month, driving subscriptions and ad revenue. “We’ve worked very hard to be a collaborative and supportive technology and advertising partner to news publishers worldwide.

Data from the report by the alliance was partly taken from a study by the economics consulting firm Keystone Strategy which relies on statistics that were made public in 2008 when a Google executive estimated that Google News generated $100 million in revenue. The study also notes that the company’s revenue has grown exponentially since 2008.

Mr. Egger, of the Philadelphia Media Network, said the big tech companies should show some appreciation for the content that news publishers provide.

“There’s the potential for a beautiful codependence,” he said. “If you look at the reason they have such high engagement on their platforms, increasingly news is the No. 1 driver. Given that, they wouldn’t want to see news go away. And yet the unintended consequence is we need to share the revenue or get paid for the content that we produce.”

Two giant companies — Alphabet, which is Google’s parent, and Facebook — are major distributors for news publishers. The two of them ferry more than 80 percent of external traffic to various sites. That is a far cry from the analog days, when media barons controlled how their publications reached the public and collected all the ad income they generated.

Chavern added that the tech firms are quite happy with the current state of affairs, they receive content that generates revenue for free while publishers receive little in return. “It’s a good business, where you write for them,” Chavern stated.

Read the full report in the New York Times here.