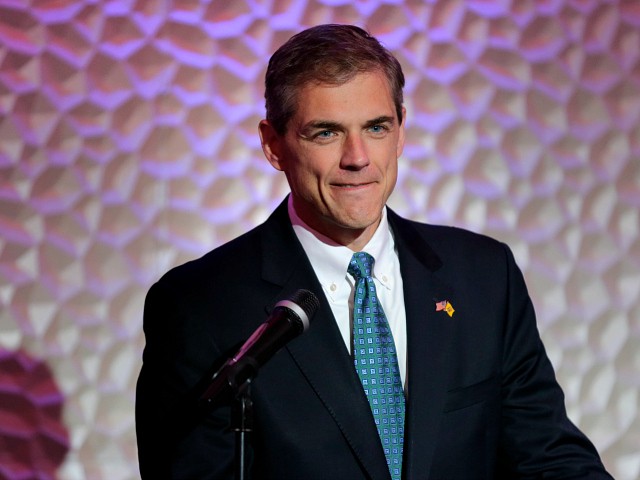 A New Jersey Republican running for Congress received a threatening letter at his law office Tuesday warning him to drop out of the race and mentioning his seven children.

“What the f— is wrong with you … s—bag?” the typed letter said. “You BETTER hope that you don’t win! Or else. How many kids do you have… 7? Unlucky 7. This is what we think of you. Time to get out of politics.”

The letter was turned over to New Jersey State Police, who are investigating the incident.

Webber, who has served five terms in New Jersey’s state assembly, tweeted a photo of the letter Wednesday thanking law enforcement for investigating the situation:

Criticizing a candidate on the issues is part of politics. Threatening my children is not. We are thankful for the support of law enforcement as we work to find whoever is behind this gutless act. We will not be intimidated as we work to make #NJ11 better for everyone. pic.twitter.com/nmVRuV9ATH

The letter arrived at Webber’s office a day after the New Jersey Republican sent a tweet bashing the “unhinged left” for ripping up campaign signs:

This is what the unhinged left is doing with their time. Don’t retaliate! Instead, knock on doors, volunteer and put up more #WebberForCongress signs. Let’s win this the right way and build a #NJ11 that is better for everyone. Learn more here: https://t.co/w9ubAu6pBO pic.twitter.com/XmL3lrYeRB

“This is absolutely appalling,” she said in a statement. “No one who decides to run for public office should feel that, by doing so, they are putting their family in danger. I condemn this in the strongest terms and hope law enforcement determines who was behind this and holds them accountable.”

Webber is in a tight race against Sherrill, a former federal prosecutor and Navy pilot. Both are running to represent New Jersey’s 11th congressional district, which is currently being held by outgoing Rep. Rodney Frelinghuysen (R-NJ).

President Donald Trump endorsed Webber in September and is fundraising for the New Jersey Republican in Washington, DC.