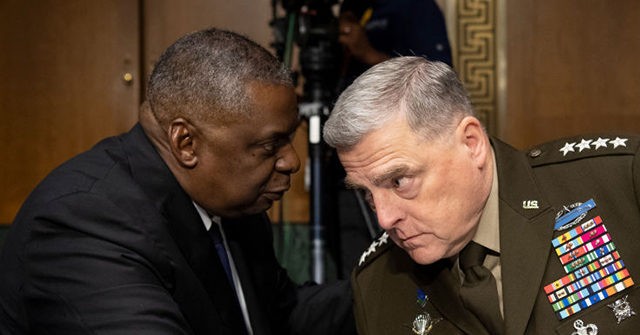 The data showed that service members spent a total of 5,889,082 man-hours on the “stand-down” — a day when all commanders in the military spoke to their troops about extremism, and on DEI, including critical race theory.

“We face real threats across the world, yet the Biden administration is more focused on promoting its leftist social agenda in the military instead of countering China, Russia and Iran or creating an effective counterterrorism plan,” said the Republican senators in a statement on Tuesday.

“Our military is not an extremist organization, and our service members, by and large all good people, are dedicated, faithful patriots,” they said.

“We are alarmed that so much training time and taxpayer money was devoted to a partisan, political agenda instead of recruiting, training and equipping the lethal force we need to defend this country.”

The senators noted that the Biden administration’s Countering Extremism Working Group in December released a report that found “fewer than 100” service members had engaged in “extremist activity” — after spending roughly a year studying it.

“For every documented case of extremism in the military, our military spent a whopping 58,000 hours in training on extremism,” the senators said, adding that “while any case of extremist behavior is wrong and harmful to military readiness,” previous defense authorization bills have already equipped the military to handle those cases.

They warned the Biden administration that they would use all tools at their disposal to ensure the DOD focuses on protecting the country.

“The Department of Defense’s primary task is to protect Americans from foreign threats. If the Biden administration doesn’t make this a priority moving forward, we will use all tools at our disposal, including the annual defense authorization bill, to ensure that it does,” they said.