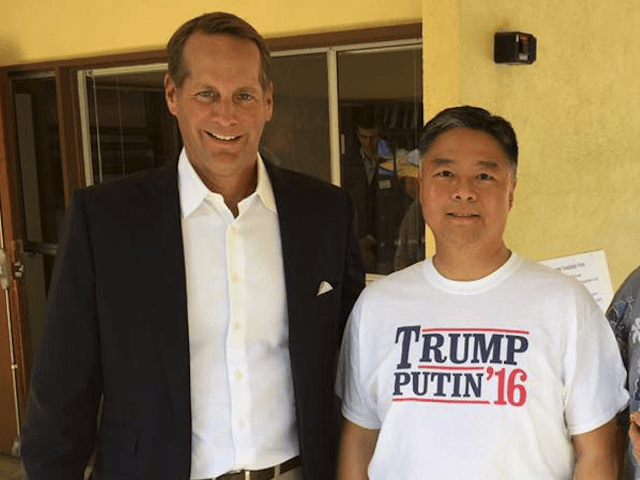 A left-wing group deleted an online questionnaire showing that Democrat Harley Rouda supported radical policies such as “Medicare for All” after Rep. Dana Rohrabacher (R-CA) drew attention to it, the Washington Free Beacon reports.

The Free Beacon notes that Rouda, like “democratic socialist” Sen. Bernie Sanders (I-VT), once supported “Medicare for All,” i.e. single-payer, government-run health care. But Rouda’s allies seem to realize that the policy is a liability in the 48th district:

Rouda, who is running in California’s toss-up 48th congressional district against incumbent Rep. Dana Rohrabacher (R.), answered the questionnaire for the Progressive Democrats of America, which is used to determine whether a candidate receives the group’s endorsement.

If candidates answer “yes” to a question—and wins their election—they are pledging to immediately co-sponsor reintroduced legislation in the 116th Congress on bills that include: Establishing an Oversight Commission on Presidential Capacity; an expanded and improved ‘Medicare for All’ Act; Department of Peacebuilding Act of 2017; Automatic Voter Registration Act; Raise the Wage Act; Jobs for All Act; and the Commission to Study Reparation Proposals for African Americans Act, among others.

Rouda answered “yes” to every question on the form, signaling that he supports the likes of Medicare for all, reparations for slavery, and the creation of a Department of Peacebuilding if elected. Rouda also previously said that he backs expanding Medicaid to illegal immigrants at a liberal forum during the Democratic primaries but recently claimed that he never made that statement despite it being captured on video.

Rep. Rohrabacher’s campaign on Wednesday sent an email drawing attention to Rouda’s questionnaire that was posted on the group’s website next to his name. Hours later, the link to Rouda’s document was removed.

On the questionnaire, which the Free Beacon has published, Rouda committed:

The campaign elaborated, in written responses: “We are working to articulate progressive positions, including but not limited too [sic] Medicare For All and Free College tuition.”

A life-time appointment is too important to be rushed. Partisan apologists restrained the FBI from completing a thorough investigation of Kavanaugh and serious questions remain.

Congress has an obligation to seek the truth.

On 11/6 we have an obligation to elect that Congress.

The last several polls show the race in a statistical tie as Rouda, backed by would-be Speaker Nancy Pelosi, has rallied the left by trying to link the incumbent to charges of Russian “collusion” (though no evidence of such collusion has ever been produced).

The 48th district is a moderate Republican district, with a Cook Partisan Index of R+4. It is one of seven California districts Democrats have targeted in 2018, because it is represented by a Republican but voted for Hillary Clinton in 2016.

Rohrabacher is a strong supporter of President Donald Trump, but voted against his tax cut, noting that the new restrictions on state and local tax (SALT) deductions could raise the overall tax burden of property owners in his district.