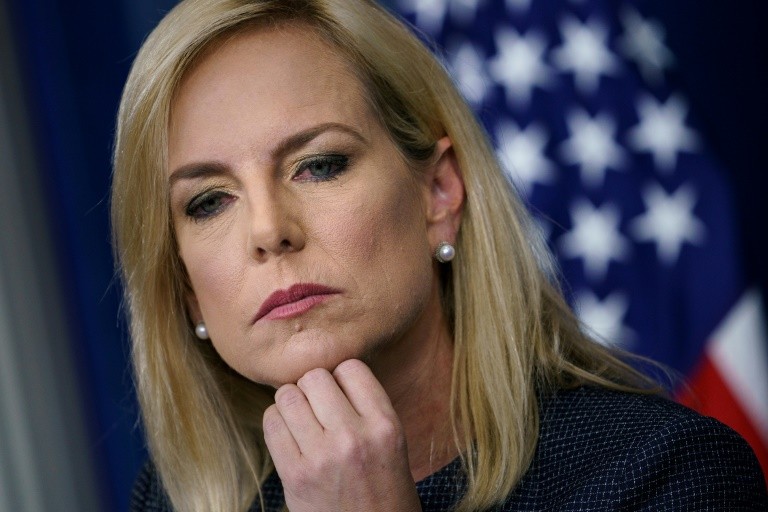 Department of Homeland Security (DHS) Secretary Kirstjen Nielsen could remain in her position “well into 2019,” a Politico report claims, despite her overseeing soaring illegal immigration at the United States-Mexico border.

According to five unnamed Politico sources, Nielsen may continue her leadership role at DHS into the new year, although only weeks ago sources said the ally of Chief of Staff John Kelly would get the boot in the near future.

Five sources inside and close to the administration describe a clear shift in the president’s feelings toward his DHS chief, about whom he has repeatedly complained over the past year. Her fate is of particular interest because, administration officials say, White House chief of staff John Kelly, a longtime Nielsen mentor and defender, could quickly follow her out the door in frustration. [Emphasis added]

Nielsen — who has no prior experience dealing with immigration-related issues — has overseen soaring illegal immigration levels that could soon put Trump on par with former Presidents Bush and Obama in regards to their records on immigration.

Last month, illegal immigration at the southern border soared to the highest level for a single month since April 2014, marking the most southwest border crossings since Trump was elected in 2016 on a platform to reduce immigration to the country.

October 2018 saw nearly 51,000 illegal aliens apprehended at the U.S.-Mexico border, with family unit crossings almost doubling what they were in October 2016, under President Obama. More than 23,000 family units crossed the southern border last month, compared to about 13,100 crossing in October 2016.

For Fiscal Year 2019, Princeton Researcher Steven Kopits projects that the U.S. will see the highest level of illegal immigration at the southern border in more than a decade. According to Kopits’ research, there will be more than 600,000 border crossings next year — a level of illegal immigration that the country has not seen since Fiscal Year 2008, when total southwest border apprehensions exceeded 705,000.