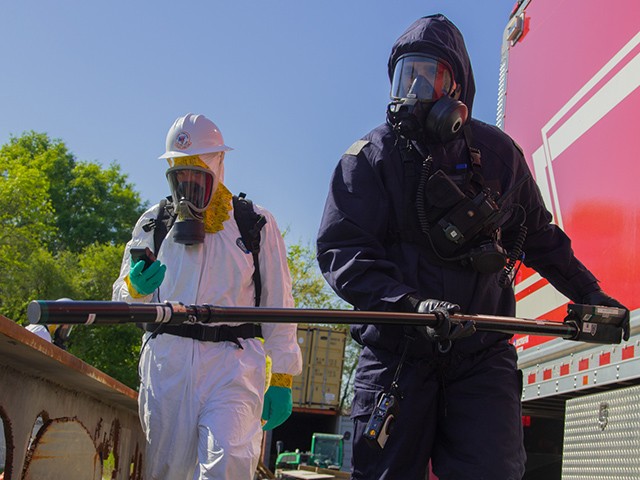 Islamic State (ISIS/ISIL) jihadis are threatening to carry out biological and radio-active attacks against the U.S.-led coalition fighting to demolish the remnants of the terrorist group in Iraq and Syria, Arutz Sheva reported on Sunday.

Last month, the office of the inspector general (IG) at the U.S. Department of Defense (DoD) determined ISIS has evolved into “an effective clandestine” insurgency nearly a year after the U.S.-led coalition decimated the jihadis’ territorial caliphate.

Although the U.S.-led coalition has pushed ISIS into a small pocket of territory in Syria, the group remains a threat and has managed to maintain control over the area for more than a year.

The Islamic State group is now threatening to stage biological and radio-active attacks to finish off the anti-ISIS coalition. The organization’s Al-Taqwa Media Foundation last week started to publish new inciting material, including animation videos depicting a burning capitol building and abandoned military vehicles as well as civilian cars – as ISIS terrorists raise their black banner. The images also showed four symbols to warn against biohazards which were placed on a nearby building and three barricades near the burning target.

In the video, the terrorist group reportedly added:

While Trump promised defeat of the Islamic State, Obama has lied before and our Lord – the Almighty – promised victory, and here we are. This campaign is your last campaign, and it will fail by the permission of Allah. As all your campaigns have been broken before and failed, but this time we are going to invade you, and you will never invade us ever.

The pro-ISIS Al-Taqwa outlet also released a poster depicting a destroyed house with crows flying above the structure and three radio-activity warning symbols attached to a signpost.

“We will soon do this,” a text on the poster cautioned.

In June 2015, Australia’s foreign ministry, citing NATO, revealed that ISIS had gained access to radioactive material from hospital and research centers in the territory it had seized in Iraq and Syria, prompting fears that the group could develop a large “dirty” bomb.

In early 2017, the Telegraph reported that U.S.-backed Iraqi forces found “radioactive materials” in the former ISIS base at the Mosul University, which once served as the jihadist group’s headquarters, makeshift chemical weapons factory, training facility, and killing ground.

The U.S. military and the United Nations-backed Organization for the Prohibition of Chemical Weapons (OPCW) have found that ISIS has used chemical weapons against its enemies, including American troops.

“Indian defense officials have previously warned of the possibility the militants could acquire a nuclear weapon from Pakistan,” the Independent reported in June 2015.

Last month, the Pentagon’s IG reported: “ISIS has lost all territory it held in Iraq and remained in control of only one percent of territory it once held in Syria. However, the DoD and a report produced by a United Nations Security Council monitoring committee stated that an effective clandestine ISIS organization has moved underground and is acting as an insurgency in both countries.”

On Monday, Iraq marked the anniversary of its victory over the ISIS.

“The Islamic State has been stripped of nearly all the territory it ruled in Iraq and Syria and has been pummeled by nearly 30,000 airstrikes. But the extremist group has still managed to retain a small pocket of land on the Syria-Iraq border for more than a year,” the New York Times (NYT) acknowledged the previous day.

Maxwell Markusen, a researcher at the Center for Strategic and International Studies (CSIS) think-tank, told the Times ISIS still has “20,000 to 30,000” jihadis in Iraq and Syria.

At the end of last month, ISIS broke out of its last enclave to attack the U.S.-backed Kurdish militiamen in northern Syria, killing over 90 fighters in one of the terrorist group’s largest attacks in weeks.

“More than 500” ISIS jihadis attacked the U.S.-backed fighters, mainly using “motorcycles carrying medium and heavy machine guns, followed by armored vehicles,” the Syrian Observatory for Human Rights (SOHR), which uses a network of ground sources to monitor the conflict, reported at the time.