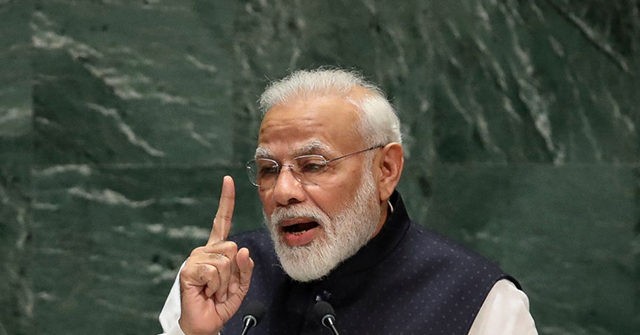 Amid worsening relations with China, the Indian government is reportedly growing more receptive to trade overtures from Taiwan, while also considering closer oversight of investment proposals from China.

Chinese media responded to these developments with characteristic belligerence and arrogance, scoffing at India for believing it can defy its powerful neighbor.

The Times of India (TOI) reported on Tuesday that Prime Minister Narendra Modi and his administration were formerly concerned about provoking an ugly battle with China at the World Trade Organization by responding to Taiwan’s offer of bilateral trade negotiations, but over the past few months, “the hawks in India who want to start trade talks are getting the upper hand.”

These Indian officials believe developing a relationship with Taiwan would make India less dependent upon Chinese investment capital, and therefore better able to develop its own high-tech industries. One of Modi’s immediate goals is reportedly to secure some $143 billion in Taiwanese investments for developing smartphones, a market China has dominated in India until now.

TOI noted that India and Taiwan currently enjoy a little over $7 billion in annual trade, a fraction of the $110 billion in trade between India and China. India’s trade with China decreased considerably after the Wuhan coronavirus pandemic broke out, and especially after hostilities flared up between the two countries along their border in the Himalayas.

A more recent event might have been the last straw for Indians. In early October, the Chinese embassy in New Delhi lectured Indian media about respecting the “one-China principle” and refraining from referring to Taiwan as an independent country while reporting on Taiwan’s National Day holiday. The Taiwanese government took out some ads in Indian newspapers to commemorate National Day and celebrate Taiwan’s friendship with India.

Indians were outraged over China’s attempt to censor their media. Indian social media users made a point of ignoring China’s commands, while the Modi administration made it clear that Indian media was “free to report on any issue it deems fit.”

India’s foreign ministry underlined this point by creating a hashtag called #TaiwanIsACountry. Another hashtag for #TaiwanNationalDay became one of the most popular topics on Indian Twitter. A spokesman for India’s governing BJP party hung a “Happy National Day, Taiwan” sign outside the Chinese embassy in New Delhi.

Taiwanese President Tsai Ing-wen thanked Indians for their National Day greetings and posted a photo of herself visiting the Taj Mahal.

“We have to think about the way for democracies, for like-minded countries, to work further together. We have traditional good relations with the United States, with Japan, and we want to develop closer ties with India as well,” Taiwanese Foreign Minister Joseph Wu said during an interview on Indian television last week.

The Chinese Communist Party (CCP) responded to these developments with its usual combination of whining and bullying. On Friday, a spokesman for the Chinese embassy in New Delhi instructed Indian media to “adhere to the correct position with regard to the significant core interests of China’s sovereignty and territorial integrity,” doubling down on the censorship demands that enraged Indians in early October.

The Chinese embassy further lectured India not to “provide Taiwan independence forces a platform, so as to avoid sending the wrong message.”

China’s state-run Global Times on Monday threatened India not to proceed with proposed regulations that would tighten oversight of Chinese investment, warning that the “consequences for India’s economy” would be far worse than any damage to China.

“Compared with the Chinese economy, which is already on the road to recovery, the Indian economy is still struggling under an increasingly severe epidemic. At this juncture, any move to clamp down on foreign investment or other economic activities seems highly misplaced, considering that India’s top economic priority should only be focused on how to return to the growth track,” the Global Times wrote.

“The poor economic performance and the severity of the epidemic mean that India cannot afford any more hits from poor policymaking,” the Chinese editorial continued. “So if the Indian government really plans to conduct a comprehensive review of any China-related foreign direct investment proposals, it would certainly deter Chinese investors that may have already been hesitant about their plans in India due to the border tensions.”

“If India’s policymakers take the extreme step of targeting Chinese investments, confidence in India’s ability to maintain basic economic order and guarantee the safety of foreign investment will be devastated. And that will be a real blow the Indian economy cannot afford,” the Global Times warned.

The Diplomat judged over the weekend that China’s effort to bully India away from Taiwan has “backfired,” with the National Day unpleasantness kicking off a “snowball effect of mutual goodwill between India and Taiwan.” Whether that goodwill will develop into major trade deals and diplomatic recognition remains to be seen.