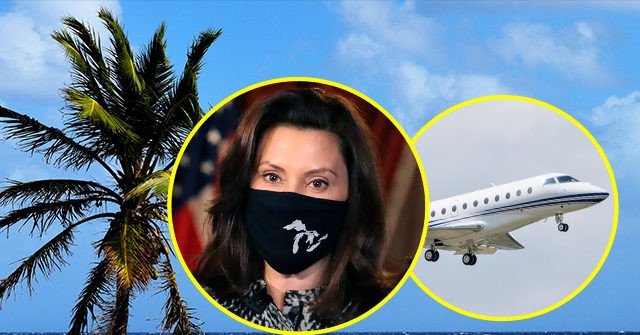 Michigan Democrat Gov. Gretchen Whitmer, who is up for reelection this year, held a string of California fundraisers while her state was leading the country in new coronavirus cases, according to a report.

Months ahead of a tough reelection battle, Whitmer held fundraisers in Democrat strongholds across California, according to the governor’s 2021 fundraising records reviewed by Fox News.

The records show the governor held an event in a private residence in Los Angeles on November 16, where she raised roughly $78,000 from the appearance. The Los Angeles event was the first stop of her trip in California.

The same day, November 16, the Detroit News and Detroit Free Press published stories — Michigan leads the nation in new COVID cases, and Michigan is now worst COVID-19 hot spot in nation; hospitals pushed to capacity — claiming the state was the worst coronavirus “hot spot” in the country and the hospitals were being stretched thin, while she was starting her days-long fundraising trip.

The report noted that the week Whitmer made her fundraising trip with the California coastal elites, the state had a little more than 3,000 coronavirus patients, which was the first time Michigan had that many cases since the spring.

“The more reports come out, the more we uncover about Gretchen Whitmer’s priorities, which are not to keep Michiganders safe, but rather, to ascend the political ladder while destroying livelihoods,” Gustavo Portela, the communications director for Michigan’s GOP, told Fox News. “It’s clear she can’t be trusted to lead the state or keep people safe from this deadly virus. We must retire her and her cronies this fall.”

“The real reason the governor went to California was to raise money with liberal west coast elites and hide from Joe Biden. Michigan taxpayers deserve to know if they paid for this trip,” questioned Eric Ventimiglia, the executive director for Michigan Rising Action. “Michiganders are tired of watching Gov. Whitmer focus on her political career while our state deals with the long-term effects of COVID and the Governor’s restrictive lockdowns.”

However, Whitmer’s approval is underwater with voters from the state at this time. A recent EPIC-MRA poll of 600 likely Michigan voters found that only 45 percent of the respondents viewed her positively, while the majority (52 percent) viewed the governor negatively.

Additionally, when the respondents were asked about Whitmer’s election chances, only 41 percent stated that they would support her reelection, whereas 49 percent said they “want to replace her or give someone else a chance in the office.”