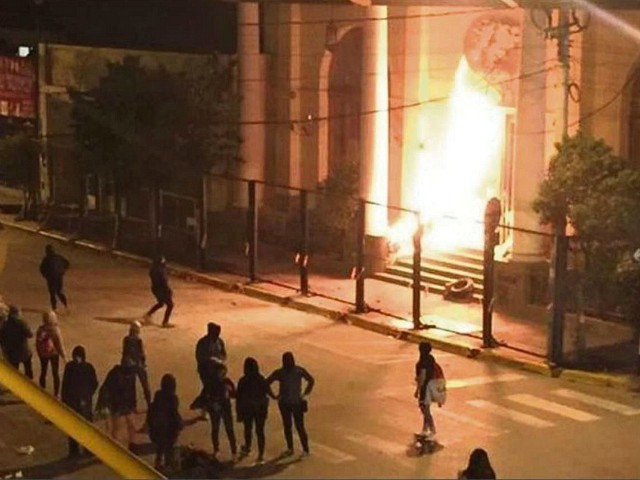 The protest came at the end of the annual National Encounter of Women, a three-day event featuring activities for women and transgendered people. While the National Encounter of Women often culminates in a pro-abortion rally that also promotes legal prostitution, Crux observes that in recent years, the protest has “featured a small yet significant group of demonstrators who throw bottles full of gas into Catholic buildings and leave walls filled with profanities.”

A tweet by Malvinas Argentinas, a city in the country’s Chubut Province, reported the violence:

This year, the protest follows the rejection of a bill by Argentina’s Congress that would have legalized abortion on demand until the 14th week of pregnancy. Abortion remains illegal unless the life of the mother is in danger. Argentina’s constitution protects the right to life from “its conception until natural death.”

“Abort your heterosexuality,” “Church and State, separate affair,” “death to the macho is not a metaphore,” and “lesbianize yourself” were among slogans an estimated 50,000 women who rallied through downtown Trelew left behind, with graffiti scrawled on storefronts, privately-owned homes and churches.

The news report indicates that, according to the organization Young People for Family and Life, the Trelew government warned people to remain in their homes and Catholics to stay away from churches on Sunday during the violent protest.

Social media reports indicated the pro-abortion women were throwing the firebombs at the church of Our Lady Auxiliadora while people were inside praying during Eucharistic adoration:

An investigation into the violence continues. Ten people were arrested in connection with the protest, but they were released by Monday.