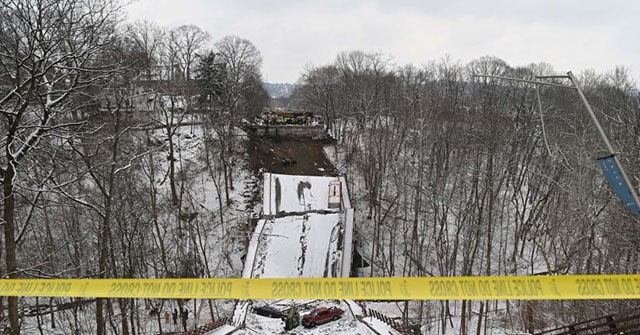 The Pittsburgh bridge that collapsed early Friday was in poor condition, and the state did not allocate federal infrastructure funds for its improvement, according to a report.

The bridge that collapsed near Frick Park injured ten, several of whom were transported to a hospital, Breitbart News previously reported.

Pennsylvania is set to receive more than $327 million in federal funding for bridge repair and replacement under the infrastructure plan, with about $49 million going to “off-system,” or local, bridges like the Forbes Avenue bridge.

But the bridge is not among the highway and bridge projects targeted for federal funding in the state’s 2021 transportation improvement program.

City officials haven’t said why the bridge, built in 1970, wasn’t placed on the list for federal infrastructure funding.

On a scale from zero to nine, with nine being in excellent shape, the 447-foot bridge “had an overall 4 rating and was listed in poor condition,” the outlet reports. Moreover, the deck and superstructure of the bridge were rated at four out of nine, while the substructure scored a six.

President Joe Biden had been slated to attend an event in Pittsburgh on Friday, prior to the bridge’s collapse, and stopped at the disaster site to highlight the importance of infrastructure, Breitbart News reported.

While heading to the bridge, Biden’s motorcade passed a man who yelled, “Let’s go, Brandon!” as another person held a sign reading, “Biden is not my president.”

Biden toured the wreckage and thanked first responders for their efforts.

“I’ve been coming to Pittsburgh a long time,” he said and claimed Pittsburgh had the most bridges of any city in the world.

“And we’re going to fix them all,” he added.