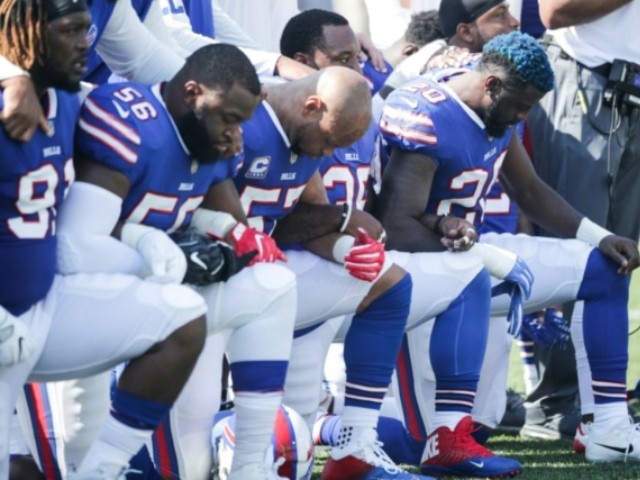 Few issues have generated more passion and interest over the last few years, than the NFL anthem protests. Though, for all the passion and emotion that topic brings out, no one was getting shot over it.

Well, at least no one was getting shot over it up until last Thursday.

A Thanksgiving family gathering in North Carolina nearly turned deadly, when a father shot one of his sons during a heated argument over NFL anthem protests.

According to the warrant, witnesses told police that the victim had been drinking heavily throughout the day before the physical and verbal confrontation that led to the shooting occurred.

Lamadrid told police that his family had just sat down to have Thanksgiving dinner when two of his sons got into an argument about athletes taking a knee during the national anthem, warrants show.

According to the warrants, once Lamadrid realized he couldn’t stop the confrontation and his youngest son wouldn’t leave the home, he went to get his shotgun. The man left the home and went to the backyard after seeing his father with a shotgun.

One of Lamadrid’s other sons then started an argument with him saying that it was his fault the whole confrontation began, warrants show. He then asked that son to leave the house. His son complied and left.

Once that son left, the victim came back into the house and continued to argue with his father before Lamadrid took his son’s bags and put them outside on the back porch. His other son, who was first in the argument with the victim, then threw his brother’s bags off the back porch, according to the warrants.

The victim then began throwing patio furniture in the backyard. Lamadrid was still holding the shotgun as the furniture was being thrown around, warrants show.

According to Lamadrid, his son then threw a water bottle at him and hit him in the face, which caused him to squeeze the trigger and fire off a shot.

In addition to being a truly sad and dysfunctional episode, as any incident of a father shooting a child definitely is. The terrible irony in all of this is that the NFL anthem protests have almost completely stopped. Each week there are normally less than a handful of players protesting. In addition, there were no protests from players during any of the three Thanksgiving games.

Which leads one to wonder how the situation escalated to this extreme degree?

“Lamadrid was arrested and has since bonded out of jail, according to arrest records,” CBS 17 reports.