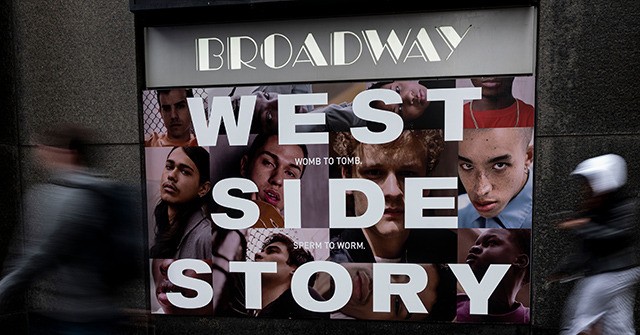 A revival production of West Side Story is set to debut this month, but its classic “star-crossed lovers” theme will cede the stage to modern political touchstones such as identity politics and police brutality.

Gone will be the Puerto Rican Sharks facing off against the all-white Jets, says Bloomberg’s Brian Schaefer. Instead, “Both Sharks and the Jets are multi-hued gangs to such a degree that they become indistinguishable at times.”

The show, spearheaded by Belgian theater director Ivo van Hove, will open on Feb. 20 at the Broadway Theater in New York City and intends to wholly remake the 1950s adaptation of Shakespeare’s Romeo and Juliet.

According to Bloomberg, van Hove is also dumping the play’s traditional cityscape sets and even the iconic “finger snaps” dance sequences.

The revamped choreography will be less sweeping movement and more “grim-faced posturing and subtle shifts in balance, projecting their power through stillness, rather than motion,” Schaefer writes.

The stage will mostly be empty and, instead of sets, a giant projection screen behind the actors will play scenes from YouTube and extreme closeups of performers’ faces as they act, sing, and dance on stage. It is something van Hove thinks will appeal to today’s YouTube-savvy youth.

Schaefer says the unconventional casting also touches on LGBTQ issues: “That process stemmed from conversations around identity and representation, which, in many ways, are baked into the DNA of Arthur Laurents’s original book and Stephen Sondheim’s original lyrics (Jets member Anybodys was already genderqueer in the film).”

Further, van Hove intends to turn the comedic “Officer Krupke” sequence — where the teens joke about how the venerable police officer harasses them on the streets — into a commentary on police brutality.
“It’s about the structural abuse of institutions, the police, the justice system, the social system, the health-care system,” he says of the re-imagined sequence. “It was very clear that this was a very political song.”

Throughout the profile, Schaefer and van Hove depict the play as inspired by and living in the shadow of one Donald Trump. “The issues the show grapples with—the toxic camaraderie that comes with shared hatred, the demonization of difference—are issues waiting for viewers right outside the theater,” the Bloomberg author writes. “Now, in 2020, another combative presidential election is in process. The man who once stood on the periphery of the debate stage is well-poised for reelection. And two Belgian artists have reimagined a quintessentially American story to confront new audiences with the tragedy at its heart.”