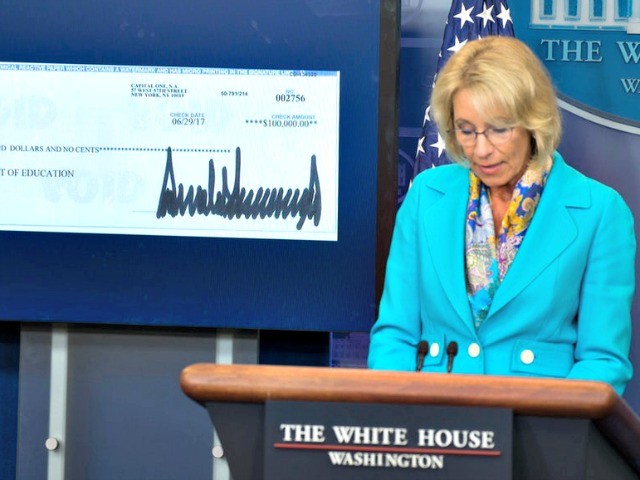 The federal education department is poised to release new rules for campus sex assault allegations that do not automatically assume the accusations are truthful, a Washington Post report says.

The overhaul of Obama-era Title IX campus sex assault policies is expected to provide due process for those accused of sexual misconduct, including the ability to cross-examine their accusers.

According to the report, the proposed regulations will be released before Thanksgiving, and possibly even this week.

In September 2017, education secretary Betsy DeVos announced the Trump administration would be scrapping the Obama administration’s policies regarding cases of sexual misconduct on college campuses.

DeVos stressed in a new “interim Q & A” that all students must be protected from discrimination in school proceedings to investigate sexual assault allegations.

In her announcement, DeVos cited cases of students, nearly all male, who were either expelled or punished in some other manner after being accused of misconduct actions which were never proven.

“Instead of working with schools,” DeVos said, “the prior administration weaponized the Office for Civil Rights.”

The Trump administration’s proposed new rules were leaked to the New York Times at the end of August. While Liz Hill, a spokeswoman for the Education Department, said the information leaked to the Times “is premature and speculative,” the newspaper reported the rules “narrow the definition of sexual harassment, holding schools accountable only for formal complaints filed through proper authorities and for conduct said to have occurred on their campuses.”

The plight of Brett Kavanaugh – who had been presumed guilty of sexual misconduct based solely on the accusations of women and without due process – brought the experience many young men on college campuses face to light, since the Obama administration utilized Title IX to enact its campus sexual assault policies.

“What has been happening to young men on college campuses is now playing out on the national stage with Judge Kavanaugh,” retired university administrator Patricia Daugherty told Breitbart News in September during the Senate confirmation hearings. “Incredible money and ‘training’ have gone into efforts to immediately side with the accuser, with little to no interest in due process for the accused. The fever pitch we see on the news has been nurtured in college.”

Daugherty, who currently is president of Eagle Forum of Georgia, said parents’ concerns for their sons on college campuses are “completely rational in this climate.”

“We are doing a terrible disservice to young men and also to young women by encouraging such emotional, fear-based atmospheres,” she added.

Some college and university officials, however, have already said they will ignore the Trump administration’s anticipated campus rules.

“We made important strides over the last years of the Obama administration when it comes to Title IX issues,” Shapiro said, according to TribLive. “And the idea that Secretary Betsy DeVos would want to roll back those Title IX (civil rights) protections is something that does not sit well with me.”

“I have all the confidence in the world in our university leaders of Pennsylvania,” Shapiro added. “They’ll fill the gap created by the Trump administration’s wrong-headed policies.”

According to Politico, Democrats who will soon take control of the House are “ready to pounce” on the Trump administration over the anticipated rules overhaul.

“The rewrite is among the most controversial moves she’s made since taking office and Democrats are sure to target it as they wield their newfound control of the House to call DeVos and her aides to testify on Capitol Hill,” the report states, adding that California Democrat Rep. Maxine Waters is hosting a roundtable Thursday with members of Congress, civil rights advocates, and student leaders about the proposed rules.

Joy Pullmann, executive editor at the Federalist, told Breitbart News the ideology behind the implementation of the Obama-era policies on campuses sparked the fire that has spread across the nation.

“It has always been true but is now becoming obvious to more Americans that what happens on campuses does not stay on campuses, or only affect the minority of Americans with college degrees,” she explained, adding:

U.S. colleges and universities create the ideas, atmosphere, and policies that affect the nation, plus the nation’s taxpayers underwrite the bulk of our elite’s credentials through these institutions, and this is why everyone should care and raise his or her voice about what happens there.

“Obama’s Title IX rules that amped up campus kangaroo courts were quite clearly a test run of the kind of sexist mob attacks they want to bring to the entire culture,” Pullmann continued. “The effects are to degrade society by degrading justice itself, by reducing it to identity politics rather than the truth of what happened.”