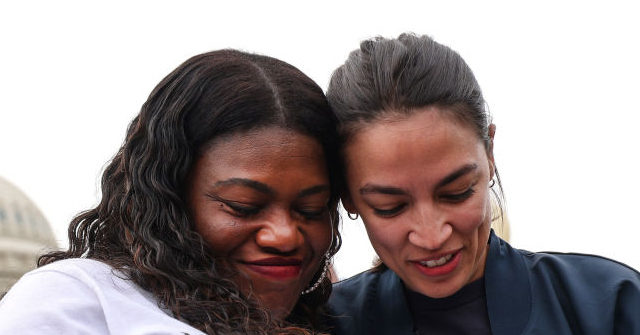 The DCCC’s report indicated the GOP has been successfully warning that the Democrats are attempting to “defund the police” and “open borders” with “amnesty,” threatening the Democrats’ chances of retaining the House in November, according to Politico. The report characterized Republicans messaging on those issues as “alarmingly potent.”

Instead of ignoring the GOP’s alarm bells, the report encouraged the DCCC to “correct the record” because “changing the subject risks confirming suspicions.” But Democrats have consistently pushed open border policies and defunding police narratives.

“Defund the police’ is not the problem,” Rep. Cori Bush (D-MO) said last week. “We dangled the carrot in front of people’s faces and said we can get it done and that Democrats deliver, when we haven’t totally delivered.”

Regarding open borders, videos throughout the last few months have also surfaced showing secret flights of migrants landing in the interior of the nation, flooding the economy with cheap labor and expensive housing.

The DCCC report additionally revealed that Democrats should be worried that generic polling is favoring Republicans. “The DCCC warned that if Democrats don’t respond to Republican attacks on these issues, the GOP’s lead on the generic ballot jumps from 4 to 14 points in swing districts,” Politico said of the report:

If Democrats don’t answer Republican hits, the party operatives warned, the GOP’s lead on the generic ballot balloons to 14 points from 4 points — a dismal prediction for Democrats when the GOP only needs to win five seats to seize back the majority. But when voters heard a Democratic response to that hit, Republicans’ edge narrowed back down to 6 points, giving candidates more of a fighting chance, especially since those numbers don’t factor in Democrats going on the offensive.

More specifically, the DCCC’s polling reportedly indicated the Democrat Party is seen as “preachy” and “judgmental” and too “focused on culture wars.” The stereotype has turned off voters, such as blue-dog Democrats, independents, and Hispanic voters, Politico wrote.

In summary, the report indicated the Democrats’ messaging problem is a result of failing to solve problems for the American people by not “making good use of their majority.” In 2021 under Democrat rule, inflation has increased, migrants flooding the border have increased, crime has increased, supply chain woes have increased, and wages have decreased.