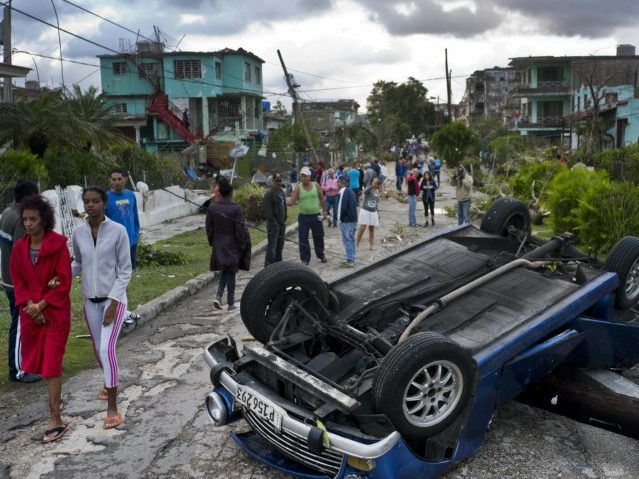 Local Communist Party officials in the Regla neighborhood of Havana, Cuba, are selling chicken and rice to locals in the aftermath of a devastating and rare tornado that left much of the capital in tatters, the independent outlet Cubanet reported this week.

Other media, like the independent newspaper 14 y medio and Miami’s Telemundo affiliate in the United States, have received similar reports that victims of the tornado – responsible for at least four deaths and over 100 injuries – ventured to a local government food post expecting humanitarian aid, but found they were expected to pay for government-provided aid, instead.

The tornado, believed to be caused by an extreme hailstorm, landed over several residential communities in Havana on Sunday night, leaving much of the already dilapidated city in near-complete destruction. There is no evidence that the tornado caused damage to the capital’s beachfront resorts, which the government owns and operates to generate revenue.

Cubanet interviewed several victims in the Regla community of Havana, who said they approached a local government post seeking food and other aid, believing it to be complimentary as is customary in an emergency. Instead, they found small food posts selling chicken and rice for 1.65 Cuban pesos (about $0.06) an ounce. As the neighborhood has not had electricity since the tornado, many residents had no choice but to buy the food, which quickly ran out after a long line formed to buy it.

The newspaper 14 y medio reported that, on Tuesday, the government began selling crackers and eggs.

“In such a situation, it was assumed that the State would immediately create the conditions to offer free cooked food to these people [the victims],” the newspaper argued. “On the contrary, government businesses offered special sales of eggs and crackers … the ‘special’ does not refer to discounts, but to the fact that these virtually disappeared products were available at all.”

Cuba is currently suffering a severe food shortage that began in December after, according to the communist regime, several of the nation’s grain mills broke down. The Castro regime insists it has no access to replacement parts, causing a collapse in the availability of bread and other wheat products. Raúl Castro’s second-in-command, President Miguel Díaz-Canel, blamed the situation on U.S. President Donald Trump.

The regime has not explained the shortages of food products that do not need to be processed through a mill, like eggs. One hypothesis is that the humanitarian crisis in Venezuela – a nation the Castro regime has relied on for free oil and financial aid since the rise of late dictator Hugo Chávez, has finally begun to affect the parasitic Cuban economy. Venezuela’s food crisis is so severe that the average citizen lost 24 pounds involuntarily in 2017, but that did not stop the socialist regime of Nicolás Maduro from continuing to ship the little food the country has to Cuba last year.

The Cuban newspaper confirmed that many in the Regla community went without dinner Tuesday night as they had no access to money; many residences there were fully turned to debris in the aftermath of the tornado.

Cubans have attempted to cobble together a relief effort independent of the government in light of the lack of aid. Diario de Cuba, a Spain-based newspaper, reported Wednesday that residents of less damaged neighborhoods have begun to organize to bring food and clothing to those that lost it all, using social media to raise awareness. Local artists and musicians – who Díaz-Canel have specially targeted for government repression – were at the forefront of the effort.

The Castro regime insists that it is doing everything possible to help the tornado victims. Diario de Cuba, citing the Communist Party newspaper Granma, reports that the Party has established “17 commissions … to offer information and facilitate logistics for those assigned to the purchase of resources.” Díaz-Canel, who toured the damage on Monday, held a meeting of the Council of Ministers to discuss the situation.

Granma also reported the establishment of 14 government offices, again, to sell goods necessary to the victims. On Wednesday, the newspaper applauded the nation’s sanitation workers for clearing out damaged sewage lines threatening to spread disease to areas in which the tornados broke through the ground.

Victims describe the damage as worse than that typical of the more common hurricanes on the island, leaving behind a “disaster area” comparable to a “war zone.” Meteorologists estimate that the tornado was a category F4, the second-strongest possible, and at least as strong as the last one to land on the island in 1940.