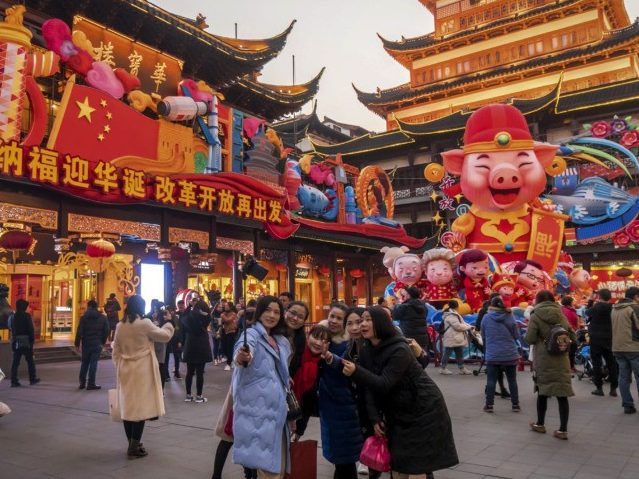 According to Radio Free Asia on Wednesday, residents of the Ili Kazakh Autonomous Prefecture in Xinjiang said they were invited to Lunar New Year dinners where pork was served. Chinese officials threatened them with imprisonment in Xinjiang’s notorious “re-education” camps if they refused to participate.

RFA also obtained photographs of a Chinese official visiting poor Muslim households and offering them pork to eat in honor of the new Year of the Pig. These deliveries are evidently not a mistake or an abnormal practice. RFA was told the vast majority of ethnic Kazakh households received a pork delivery by the end of 2018.

Witnesses in the Kazakh Autonomous Region said efforts to make Muslims eat pork began in earnest late last year in concert with a push to make them participate in the Spring Festival for the new year, a holiday Muslims do not observe.

“Muslims like us, the Uyghurs, the Hui, and the Kazakhs, don’t do that,” one correspondent told RFA. “But people have been sticking up New Year poetic couplets at the doors of Uyghur and Kazakh households and giving them pork. If we won’t put up the couplets or hang lanterns, they say we are two-faced, and they send us to re-education camps.”

Poetry couplets are an important Lunar New Year custom that dates back some three thousand years. The modern version of the practice usually takes the form of two vertical strips of red paper inscribed with Chinese characters spelling out two lines of poetry with some rather complex rules about how they should be written and read. The basic idea is that one line of the poem encourages bad history from the old year to be left behind, while the other offers good wishes for the year to come, using poetic allusions and traditional proverbs.

Decoration with lanterns is also a part of Lunar New Year celebrations, especially during the Lantern Festival in the first month of the year. Both the couplet and lantern customs have roots in ancient religious traditions that many Muslims find objectionable – the couplets derive from a very old story about the guardians of the spirit world, while the lanterns were originally meant to keep evil spirits at bay.

Of course, some Muslims who do not dwell on the spiritual aspect of Lunar New Year customs might simply resent having Chinese poetry and lanterns hung on their houses, especially as the Chinese government grows increasingly determined to forcibly subordinate religious faith to Communist dogma.

A spokesman for the World Uighur Congress confirmed to RFA that China is “stepping up its campaign to assimilate Uighurs into Han Chinese culture” by forcing them to celebrate Lunar New Year. This campaign of forced assimilation allegedly includes demands for Uighurs to violate Muslim dietary laws by drinking alcohol and eating pork to prove they reject “extreme religious beliefs” and show proper respect for Chinese culture.

RFA additionally noted the epithet “two-faced” is not a schoolyard taunt in China. It is an ominous allegation that implies members of ethnic groups are bad citizens, traitors, and troublemakers in need of forcible re-education.

The UK Independent published similar reports in May about Uighur prisoners forced to eat pork and drink alcohol in China’s “re-education” camps. Detainees were also forced to repudiate Islam, apologize for following ethnic customs, and recite statements of praise for the Chinese system. The Chinese Foreign Ministry refused to comment on the report.

Earlier reports on the grotesque surveillance state and prison complex in Xinjiang indicated Muslims have been sentenced to re-education for refusing to eat pork.

The Year of the Pig is proving to be a delicate affair in Malaysia, which has large Chinese and Muslim populations. Chinese New Year celebrations usually feature prominent displays of the animal the year is named after, but the pig has been significantly downplayed, particularly at shopping malls that wish to attract both Chinese and Muslim customers. Malaysians of Chinese extraction seem remarkably comfortable about replacing the pig with, of all things, a Japanese cartoon cat.