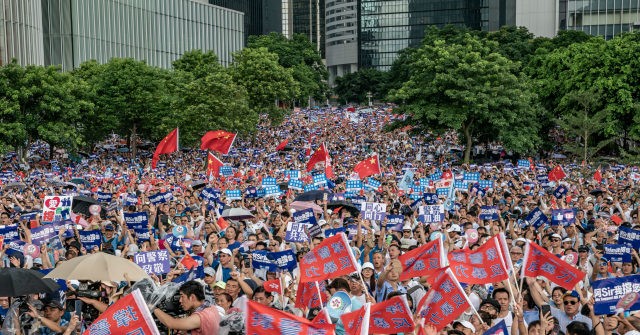 The South China Morning Post revealed on Wednesday that in June the communist government of China stationed a “task force” in Shenzhen, slightly north of Hong Kong, to monitor growing protests in the autonomous city.

Protests erupted in early June in response to the city’s legislature, which is not democratically elected, introducing a bill that would allow the Communist Party to extradite anyone, not just citizens, from Hong Kong for perceived crimes against the Chinese state.

Nearly 200,000 people gathered in the city on June 4 to observe the anniversary of the Tiananmen Square massacre, an event Beijing bans public mentions of, and fears of a similar Chinese takeover of Hong Kong through the extradition law fueled subsequent protests throughout the month that culminated in the destruction of the Legislative Council (LegCo) headquarters on Monday.

Protesters are demanding China respect the “one country, two systems” policy put into place when the United Kingdom handed the city over to the Communist Party in 1997. The policy allows China federal authority over the city but bans Beijing from imposing communist law on it, leaving its traditional capitalist economy intact. The protesters contend that the extradition law would hold Hong Kongers accountable for following draconian communist legal limitations on freedom of expression and religion.

According to the Post, the “task force” of Beijing loyalists arrived in Shenzhen on June 9 and has remained there monitoring the situation in Hong Kong. An unnamed source told the newspaper that the task force was “reviewing the strategy” for containing the protests “and discussing the way forward.” The officials in the task force have prioritized “stability” in the city but are attempting to find the least bloody way to contain the pro-democracy movement, according to the source.

The Post did not specify if the task force included civilian Communist Party officials or military leaders. It did note reports that senior Party leaders and “all relevant mainland Chinese ministries” were deeply involved in intelligence-gathering in Hong Kong last month.

The report of a secretive task force monitoring potential responses to the Hong Kong protests was published shortly after Chinese state media printed a flurry of stories promoting the expansion of the People’s Liberation Army (PLA) presence in Hong Kong, suggesting preparations for a military response to the protests.

In honor of the anniversary of the handover of the city from British to Chinese control in 1997, the PLA held a three-day “open house” displaying the military’s strength to “promote the Hong Kong people’s patriotic education and enhance recognition of their national identity,” according to the Chinese Defense Ministry. Last week, following the largest wave of protests against Chinese rule yet, the PLA conducted “emergency response exercises” to plan for shutting down any chaotic situation in the city. The Global Times, a Chinese government newspaper, indicated that ground, air, and sea forces all rehearsed a response to an “emergency” in Hong Kong, preparing to combat unspecified “aggression.”

Beijing had patiently been waiting out the pro-democracy protests until Monday, when young protesters stormed the LegCo headquarters and destroyed the facilities used for lawmaking. The group shattered the building’s glass exterior, spray-painted the inside of the legislative chamber floor with anti-China slogans, and desecrated all icons representing Chinese control of the city. Notably, they went out of their way to protect historical artifacts, the city’s government archives, and other non-legislative facilities in the building, such as the cafeteria. Pro-democracy movement leaders insist the takeover was peaceful, the protesters did not hurt anyone, and that they did their best to respect Hong Kong, even as they made a move against China:

Protesters broke in to Legislative Council to oppose the extradition bills. They destroy signs of tyranny, like emblem of HK, portraits of legco chairmen but save antiques, protect books, pay for cans of drinks even though no officers in Legco. pic.twitter.com/pjb2IIRwJB

“This is a direct challenge to Xi Jinping, the Hong Kong government and the central government,” pundit Hua Po told the Agence France-Presse (AFP) in an article on Wednesday about the LegCo attack. AFP noted that the protests put Xi in a difficult place, as a crackdown like the Tiananmen Square massacre in 2019 would feature in every news broadcast in the world and potentially imperil China’s international business dealings.

Under Xi, China’s economy is already in trouble due to the ongoing trade dispute with America, the costly Belt and Road Initiative (BRI), and international concerns about China’s systematic intellectual property theft. Xi has also faced the wrath of the public for failing to properly regulate the medical industry – resulting in millions of children receiving expired or faulty vaccines – and for allowing multinational corporations to abuse Chinese workers, angering fundamentalist Maoists.

Xi’s move in Hong Kong has been to launch a media blitz falsely depicting the protesters as violent rioters.

“The violent acts severely challenged the rule of law in Hong Kong, jeopardized the social stability of Hong Kong and blatantly challenged the bottom line of ‘one country, two systems,’” a column in the People’s Daily, the official newspaper of the Chinese Communist Party, declared on Wednesday. “No country or society should tolerate such acts. The central government resolutely supports HKSAR Chief Executive Carrie Lam and the HKSAR government to exercise their duty, investigate and punish the violations, and protect social order and public safety.”

“Laws are to be abided by, and law-breakers must be punished,” it added ominously.

The Global Times reacted to Monday’s LegCo takeover similarly but added blame for the West and a definitive condemnation of democracy.

“Supported by Western forces, certain extremists in Hong Kong have spared no effort to instill in Hong Kong society such an idea: To tackle all problems, Hong Kong must be more ‘democratic,’ more street demonstrators are needed, and violence should be resorted to, if necessary,” the Times asserted. “Nonetheless, Hong Kong is a developed society. With its tradition of valuing the rule of law, its high quality citizens, and the backing of the motherland, copying the ‘color revolution’ commonly seen in backward areas will definitely be resisted in Hong Kong.”

The “backward areas” the newspaper referred to are Georgia, Ukraine, and Kyrgyzstan, former Soviet states that heralded in pro-democracy “color revolutions” off the back of anti-Vladimir Putin sentiment in the 2000s.

The Global Times often uses bigoted, and specifically racist, language against other cultures and nationalities.

The Chinese Foreign Ministry itself weighed in on support for the Hong Kong protests on Tuesday and condemned the West for opposing a violent communist crackdown on the pro-democracy movement.

“I will reiterate that Hong Kong is China’s special administrative region and its affairs are purely China’s internal affairs. We deplore and resolutely oppose certain countries’ flagrant interference in them,” spokesman Geng Shuang said. “Once again we urge relevant countries to act prudently and not interfere in Hong Kong’s internal affairs in any form. They should not bolster violent illegal activities in any way or send any misleading signals with erroneous actions.”