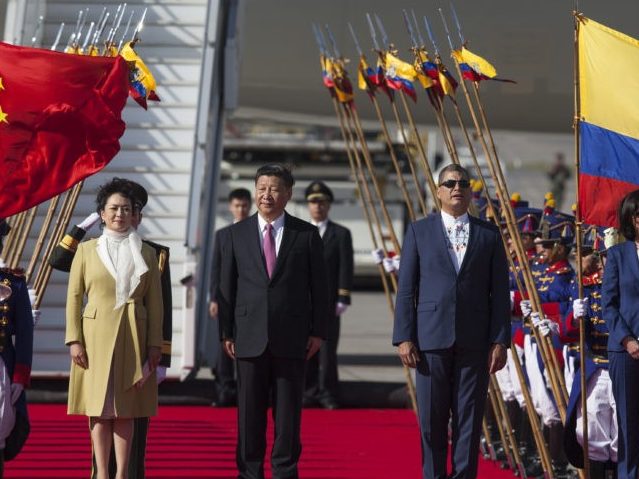 A report commissioned by Ecuador’s Prosecutor General revealed this weekend the country may have lost up to $2 billion in oil deals under the socialist government of ex-president Rafael Correa. Deals with the state-owned PetroChina gave Correa billions in credit while allegedly hurting the Ecuadorian government’s profits.

Under current President Lenin Moreno, Ecuadorian prosecutors already demanded that Correa testifying on the PetroChina deals in February, a request Correa rejected. Correa currently lives in Belgium with his wife and refuses to return to his native country, claiming political persecution.

On Monday, a local Ecuadorian newspaper published a corresponding bombshell report quoting Ecuadorians who formerly worked for a Chinese government contractor Correa brought into the country. Similar to reports from Kenya, the Ecuadorian workers say they were never paid the totals promised and were subject to abuse.

In addition to the PetroChina scandal, Ecuadorian prosecutors are seeking Correa’s return to the country to testify regarding his ties to the Brazilian contracting firm Odebrecht. Evidence surfacing in the document dump known as the “Panama Papers” led prosecutors to believe Correa and brother Fabricio may have used the firm Mossack Fonseca to hide personal savings. Correa’s vice president, Jorge Glas, is serving a six-year prison sentence for alleged ties to Odebrecht.

The report Ecuadorian prosecutors must now pore over, according to the Argentine news outlet Infobae, is a 105-page analysis containing 136 appendices and accusing dozens of former Correa staffers of having a hand in obscuring the financial workings of the deal with PetroChina.

According to investigator Fernando Villavicencio, who the Prosecutor General’s office hired to compile the report, Correa took enormous credit lines out in deal with PetroChina and other state companies like China International United Petroleum & Chemicals Co., Ltd. (Unipec), but disguised the cash as profit exchanged for “anticipated” sales of oil. The 13 contracts in question brought Correa over $18 billion in credit between 2009 and 2017.

“The credit lines were disguised as anticipated petroleum sales, but in reality, it was masked credit to not violate the national debt ceiling,” the investigator contends.

The oil sold to these companies in an allegedly “anticipated” format allegedly fell in the hands of third-party vendors throughout the Americans, where it was sold for a much smaller profit than Correa’s deals guaranteed. The result, according to Villavicencio, was a loss of about $2 billion – what the government believes the oil would have sold for on the free market.

Villavicencio called the scheme “the greatest heist in the history of Ecuador.”

Glas is among the high-ranking officials listed in the report as having participated in masking the tremendous losses to the Ecuadorian state that Correa’s deals represented.

Chinese Communist Party leader Xi Jinping made the first-ever visit by a Chinese head of government to Ecuador in 2016, in what the Chinese state-run publication Global Times called a “historic” visit. There, Chinese media reported that Xi and Correa agreed to “implement major projects in oil and gas, mining, infrastructure, water conservancy, communication and finance, and explore cooperation in agriculture, petrochemical industry, ship building, metallurgy and paper making industries.”

The Ecuadorian judiciary began taking an interest in the Chinese oil deals early this year, finding inconsistencies in profits anticipated and those reported. Correa refused to testify on the Sinopec and PetroChina deals specifically or return to Ecuador.

The oil case is one of several Correa is facing legal trouble for. His ties to Mossack Fonseca, the firm implicated in the “Panama Papers,” remain unclear, as do his ties to Odebrecht. The Prosecutor General ordered Correa to testify regarding the Odebrecht accusations on Monday, but he refused to show. Glas, from prison, also refused to testify.

In yet another criminal investigation against Corre, a judge ordered his arrest in July after sufficient evidence surfaced that he had paid kidnappers to “disappear” an opposition leader in Colombia in 2012. The arrest warrant was issued specifically because Correa refused to testify in this case. He remains at large.

Ecuador’s El Diario added to the long list of accusations against Correa on Monday a permissive attitude towards Chinese abuses of Ecuadorian workers. The culprit corporation in this report was China Water Electric Corp (CWE), which allegedly refused to pay the salaries agreed upon to workers who claim to have suffered abuses at the hands of Chinese supervisors.

The newspaper reports that a protest movement of 1,700 former CWE workers have organized to demand back pay they never received and protest against their treatment on the job. The movement, led by a worker who asked only to be identified as “Fredy,” say they had no safety precautions on the job and “were treated badly” by their bosses. Correa’s government, Fredy lamented, did not respond to their protests going back as far as 2013.