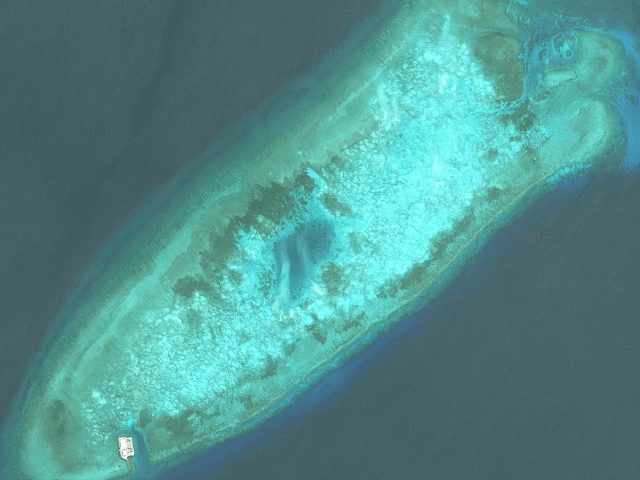 A study published Tuesday revealed satellite photos of a “modest” new Chinese structure of unknown use in the Paracel Islands of the South China Sea, signs that China has continued to construct facilities in the region despite an international court ruling finding the development illegal.

The structure in question – a small building apparently built over a reef – appears on Bombay Reef in the Paracel Islands, territory both Vietnam and Taiwan claim. According to the Asia Maritime Transparency Initiative, a project by the Center for Strategic and International Studies (CSIS), the facility is the first development China has built in the area in months, though China has not shown any indication that it seeks to abandon its development in the region. In 2016, the Permanent Court of Arbitration at The Hague found that China’s constructions in the region, mostly on Vietnamese and Philippine territory, were illegal under United Nations (U.N.) law. China vowed to disregard the ruling.

CSIS describes its finding as a “modest new structure” that first appeared in satellite images in July – a building of some sort topped by a radome and “an array of solar panels covering more than 1300 square feet (124 meters). The superstructure hides any other facilities or equipment that the platform may contain.” There is no evidence that the floating structure is powered by anything other than the solar panels, limiting its usefulness.

The study notes that it is possible the structure could help ships navigate the Paracels, operating as a lighthouse or some other sort of aid – though a lighthouse already exists nearby. “The more likely possibilities, given Bombay Reef’s strategic location, are military in nature,” it posits. “The reef is directly adjacent to the major shipping lanes that run between the Paracels and the Spratly Islands to the south, making it an attractive location for a sensor array to extend Chinese radar or signals intelligence collection over that important sea lane.”

What the structure indisputably does, the report argues, is give China more control over one of the few areas left between the Paracel and Spratly Islands where the People’s Liberation Army (PLA) cannot control or monitor essentially all maritime activity.

“With China’s rapid buildup of capabilities in the Paracels and Spratlys, the only probable gaps in its domain awareness over the South China Sea are in the northeast around Scarborough Shoal and, to a lesser extent, the waters between the Spratlys and Paracels,” the report concludes. “Any extension of those capabilities to the south and east from Bombay Reef would bring China closer to its goal of monitoring and projecting power across the entire waterway.”

The Chinese government has not formally responded to the report, which indicates that China has once again violated international law. Instead, Chinese Foreign Ministry spokesman Geng Shuang told reporters Wednesday, “I’m not aware of the specific situation you just mentioned.”

China, nonetheless, has not ceased to promote an outsized role for itself in the South China Sea, where it claims sovereign territory belonging to Vietnam, the Philippines, Brunei, Taiwan, Malaysia, and Indonesia. In the case of Taiwan, as it refuses to acknowledge the country’s sovereignty, the Chinese government claims that all Taiwanese territory is under Beijing’s jurisdiction. The Communist Party regularly claims that no disputes exist in the region and that claims of colonization in the region are an American fabrication. In an article preceding his visit to the Philippines this week, Communist Party leader Xi Jinping claimed that all disputes in the region had led to “the rainbow after the rain,” and no further disagreements existed in the South China Sea.

China’s next diplomatic step in the region is to impose a “code of conduct,” dictated by the desire of Xi’s leadership, to override international law. The code will instruct ships on how to navigate the international waters of the South China Sea, allegedly to avoid conflict in disputed areas. Chinese officials stated at last week’s Association of Southeast Asian Nations (ASEAN) conference that they expect the code of conduct to be completed within three years.

The Trump administration has vocally opposed any code of conduct that allows the Chinese government to dictate who can navigate through the South China Sea. As it stands, the U.N. Convention on the Law of the Sea (UNCLOS) states that any waters more than 12 nautical miles from the sovereign land of any country are international, and all ships shall be granted free passage. In remarks at the ASEAN conference, National Security Adviser John Bolton announced the U.S. would oppose a code of conduct that allowed China to block ships in international waters as defined by the UNCLOS.

China claims that many international waters are actually sovereign Chinese territory because it constructed artificial islands where land did not exist before, which directly violates the text of the UNCLOS.