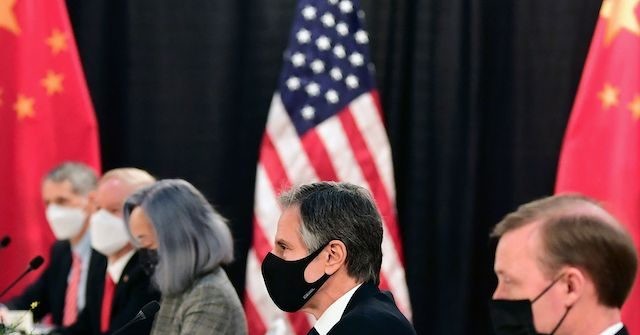 After their highly contentious first meeting in Alaska Thursday, Chinese diplomats and President Joe Biden’s foreign policy team accused each other of violating protocols that were agreed upon in advance.

A senior U.S. official, speaking to reporters on background after the opening session, accused the Chinese of “violating protocol” by speaking for much longer than two minutes as previously agreed, according to the South China Morning Post. The opening exchange of statements wound up lasting for over an hour instead of the brief introduction and photo opportunity that was envisioned.

“We will use the remaining hours to outline for the Chinese delegation in private the same messages we have consistently delivered in public. The Chinese delegation, on the other hand, seems to have arrived intent on grandstanding, focused on public theatrics and dramatics over substance,” the American official said.

A Chinese official insisted the U.S. also violated the speech limits, and the American team’s “groundless accusations” against China for human rights violations and threatening the international rule of law were an abuse of diplomatic custom.

“This is not a way of hospitality, nor does it conform to diplomatic etiquette. China has responded solemnly to this,” the Chinese official said.

“It was the United States who provoked and provoked the dispute first. Therefore, the two sides were full of gunpowder and drama in the opening remarks from the beginning. This was not the original intention of the Chinese side,” Chinese Foreign Ministry spokesman Zhao Lijian said for the record.

“China attended the meeting with sincerity and constructive attitude. Alaska is the northernmost state in the United States. When the members of the Chinese delegation arrived in Alaska, they not only felt the cold weather in Alaska, but also felt the hospitality of the American host,” Zhao complained.