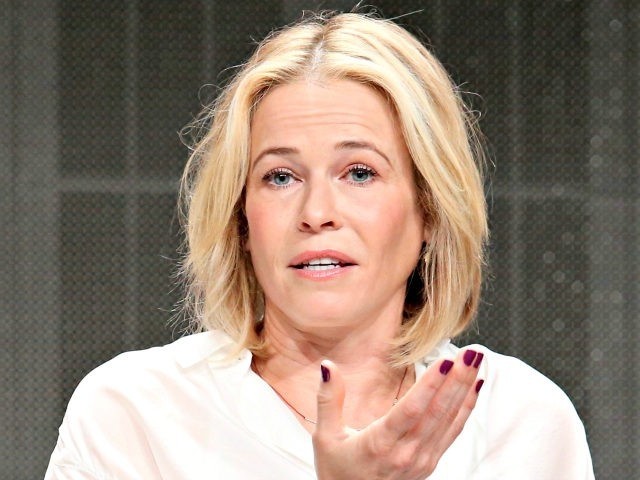 Comedienne Chelsea Handler, who is gearing up for a new Netflix series aimed at attacking “white privilege, was seen filming in the parking lot at the Philadelphia Eagles’ Lincoln Financial Field.

Handler may have been fired from her most recent Netflix series, but the streaming service is giving her another shot, this time in a “funny” series attacking “white privilege.”

Now, according to a tipster to Crossing Broad, the on-again-off-again TV host was seen filming Eagles fans during Sunday night’s game. And, according to one tipster, Handler was “baiting” fans with fake claims that they were being interviewed about their tailgating foods or their thoughts on the Super Bowl. That is until Handler’s, and her film crew’s questions turned to race baiting.

A tipster described the scene:

Chelsea Handler was at the Eagles game tailgate yesterday. No one knew it was her at the time. She was baiting fans into interviews. For example, her video crew claimed they wanted to interview people about the Super Bowl win and the food that they were cooking. They did multiple shots of the grills and tailgate buses. Then proceeded to interview people about the Super Bowl and general Eagles questions. Out of nowhere during this interview she turned the questions into our thoughts on Malcolm Jenkins protests, Kaepernick kneeling and Black Lives Matter propaganda.

The questions were purposely asked in a way that no answer would be correct. Her producer set up people to get a reaction. For the interview I was witnessing, the guys being interviewed declined to answer the questions after they realized they were being set up. Some signed a waiver before this interview as they were told this was an ‘Eagles fan documentary.’

We watched her do this to multiple people yesterday in the tailgate lot. I don’t keep up with her, but this 100% will be used in whatever she does these days. Just a heads up to give you guys a chance to tell the real narrative of what really happened when this bullshit comes out, and Eagles fans are trashed by national media per usual.

With her new show set to attack white privilege, it is likely that some of these fans could be portrayed in an unfavorable light.

Yes was walking around Wells Fargo Lot. Doing a documentary for Netflix on social injustice.