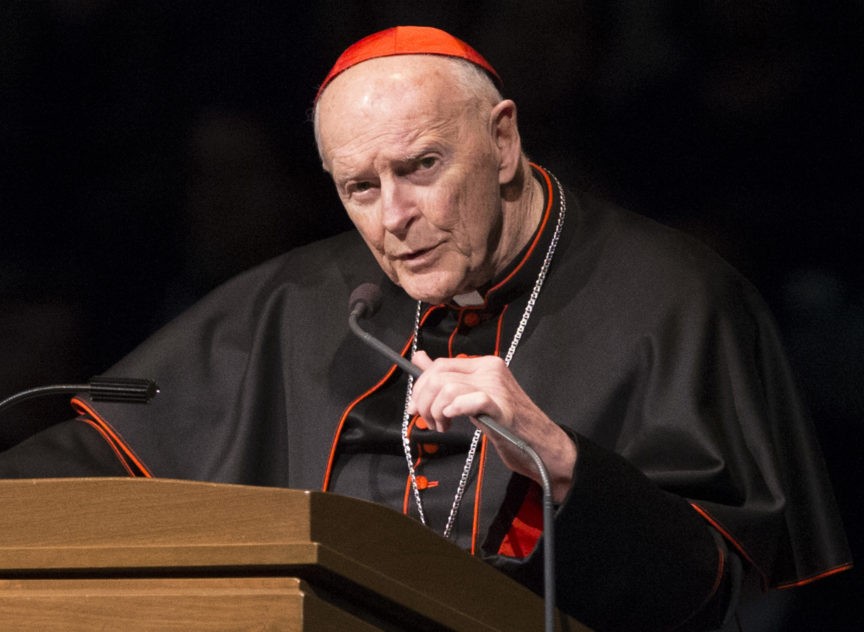 Catholics are “outraged” about reports of Cardinal Theodore McCarrick’s serial homosexual abuse, not so much because a churchman sinned as that he did so with impunity and protection, a new article asserts.

Catholics are incensed over McCarrick’s abuse, the article states, not so much because of one man’s moral failings “as that he did so with impunity, protected by the see-no-evil mentality and, perhaps, the complicity of those who have their own secrets to keep.”

Reno, who taught at a Jesuit University from 1990 until 2010, said that Jesuit novice masters during the 1970s “regarded homosexual relations as healthy, even necessary for proper priestly formation.”

“Sometimes the novice masters insisted that they be the agents of this “formation,” he said.

“It wasn’t long ago that homosexual sex wasn’t just tolerated among clergy; it was protected,” Reno asserts. “And it still is in some quarters, as McCarrick’s career indicates.”

The McCarrick case would not have even made the news, Reno claims, had it not been for the abuse of a minor.

“Were it not for revelations about sex with a minor and abuse of power,” McCarrick would have remained “a much-feted ecclesiastical eminence,” Reno states. “He was part of a much larger quasi secret about gay clergy that implicates even the best of men, undermining them in the way that unaddressed, openly tolerated corruption destroys the morale of any unit.”

According to Reno, the problem of rampant homosexual practice in the priesthood is traceable to the Jesuit order, but also beyond.

“In 2003, the Jesuit moral theologian James Keenan testified against a Massachusetts constitutional amendment defining marriage as between a man and a woman, saying that such a measure is contrary to the Church’s insistence upon the human dignity of homosexuals,” he writes. “Fr. James Martin, also of the Society of Jesus, pursues a similar pro-gay line.”

The Catholic hierarchy has chosen to abdicate its role in defending traditional Christian sexual morality, especially regarding homosexuality, he states.

Among church leaders “there’s no stomach for a battle over gay sex between consenting adults, not even when one of them is a clergyman,” Reno notes. “Narrowing McCarrick’s transgressions to sex with minors and abuse of power accords with our culture’s morality of consent. This approach indicates that the ecclesiastical establishment wants to operate on safe, secular terrain, not the Church’s tradition, which has become painfully controversial.”

This has led to a dangerous “don’t ask—don’t tell” approach to sexual morality in the priesthood, Reno suggests.

“It is painful to acknowledge that homosexual license among the clergy is tolerated even at the highest levels of the Church,” he says.

This non-confrontational policy has led to a virtual abdication of pastoral oversight, such that some major dioceses “have gay parishes on the front lines of sexual liberation,” Reno says.

This strategy of acquiescence has provoked a backlash among the Catholic faithful, however, who expect more from their shepherds, he adds.

Anger among the faithful over the McCarrick case was stoked by “an initial wave of denials,” he said. “McCarrick’s protégés—some now bishops—ran for cover, insisting they knew nothing about his misdeeds.”

Where this will ultimately lead is unclear, Reno admits, but for the moment all indications suggests that the lay faithful will accept nothing less than a full-blown draining of the swamp.