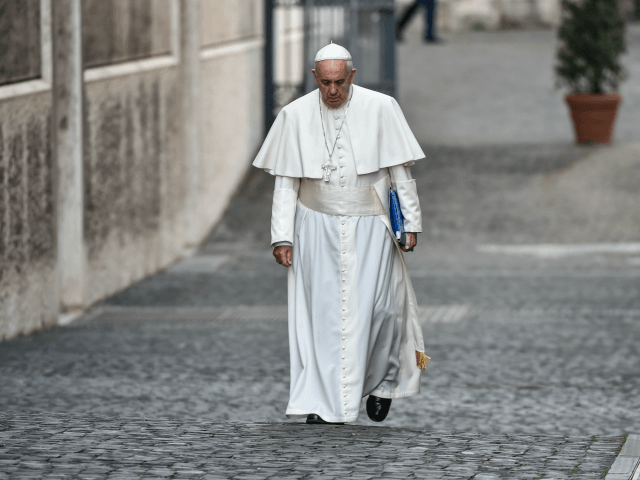 The Catholic bishops are gathering in Rome for a synod in a moment in which “the Church faces perhaps its gravest crisis since the Protestant Reformation in the form of the worldwide clerical sexual abuse scandals,” according to veteran Vatican analyst John L. Allen, Jr.

Allen, who heads up the Catholic online news outlet Crux, added that “the eyes of the Catholic world will be on how they choose to engage it.”

Much of this will depend on Pope Francis, since he currently seems to be the Church’s biggest obstacle to tackling the sex abuse crisis head-on. He has repeatedly refused to confirm or deny allegations that he knowingly rehabilitated serial homosexual abuser Cardinal Theodore McCarrick and elevated him to a position of influence in the Vatican.

Moreover, the United States bishops have petitioned the pope to launch an “apostolic visitation” — a full Vatican investigation — into the McCarrick case, which so far has fallen on deaf ears. The president of the U.S. Bishops Conference (USCCB), Cardinal Daniel DiNardo, followed up on the petition by traveling to Rome last month to urge Francis to open the investigation but returned to the U.S. empty-handed.

Wednesday was the opening day of the Vatican Synod of Bishops on youth, and, according to Allen, it may well be “the most significant summit so far on this pope’s watch.”

“The clerical abuse crisis has badly damaged the Church’s moral credibility, made it difficult to move the ball on anything else the Church cares about, and called into question the standing and personal integrity of Church leaders at all levels,” Allen noted.

“Inside the Church and out, there’s a level of anger and disillusionment that’s crippling,” he said.

On August 25, a former papal nuncio to the United States, Archbishop Carlo Maria Viganò, released an explosive, 11-page report in which he laid out a series of allegations against a number of high-ranking prelates, including Pope Francis.

The central accusation against the pope was that Viganò had personally informed him in 2013 of McCarrick’s record of abuse against priests, seminarians, and lay people, as well as telling him of sanctions imposed on McCarrick by Pope Benedict XVI. Despite this knowledge, Viganò alleged, Francis lifted the sanctions, involved McCarrick in diplomatic missions on behalf of the Holy See, and consulted him regarding the naming of new bishops for the United States.

News reports from early in the Francis pontificate would seem to corroborate charges that the pope gave McCarrick a new lease on life shortly after his election.

A 2014 article in the Washington Post stated that McCarrick was “one of a number of senior churchmen who were more or less put out to pasture during the eight-year pontificate of Benedict XVI.”

“But now Francis is pope, and prelates like Cardinal Walter Kasper (another old friend of McCarrick’s) and McCarrick himself are back in the mix, and busier than ever,” the article stated.

“Francis, who has put the Vatican back on the geopolitical stage, knows that when he needs a savvy back channel operator he can turn to McCarrick,” it said.

When challenged by journalists to respond whether the allegations made by Archbishop Viganò were true, the pope refused to answer, and has kept silence regarding the charges ever since.

A number of U.S. bishops have come forward to ask the pope to break his silence regarding when he learned of the crimes of former-cardinal McCarrick, insisting that the Viganò report contains a number of “credible allegations” that demand a response.

Last Thursday, Viganò himself said that the pope’s silence on the matter must be interpreted as a confirmation of the allegations.

“Neither the pope, nor any of the cardinals in Rome have denied the facts I asserted in my testimony,” Viganò wrote in a 4-page memo, adding that according to the law, silence denotes consent.

So, no matter what the official subject of the current synod of bishops is, Mr. Allen has suggested, the bishops themselves will want to talk about the sex abuse crisis, “and whether it’s on the synod floor or during coffee breaks or at lunches and dinners, that’s exactly what they’ll spend a good chunk of the month doing.”

The bishops gathered in Rome during October will feel “enormous pressure” to face up to the realities of the moment, Allen said, with victims of abuse, child protection advocates, and ordinary rank and file Catholics stung by the scandals “will all be looking to these bishops to supply some sort of hope.”

Whether Pope Francis will address the issues himself or continue to act as if they are unimportant remains to be seen.