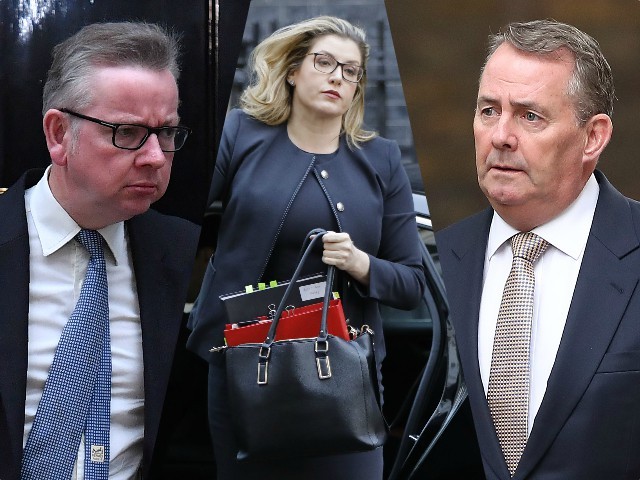 Environment secretary Michael Gove is said to be leading a group of pro-Brexit Cabinet ministers to pressure the prime minister into renegotiating the deal with Brussels.

Mr Gove, Penny Mordaunt, Liam Fox, Andrea Leadsom, and Chris Grayling are reported by The Telegraph to be planning to move in exchange for withdrawing their threats to resign from their Cabinet posts en masse.

The five are expected to tell Mrs May that there must be a way for the UK to leave the Irish “backstop” arrangements unilaterally, without the need for mutual agreement with the EU.

They are also expected to demand planning for a “technical solution” to the Irish border be inserted into the deal and clarification on the bloc’s assertion the backstop has a “level playing field” customs arrangement.

“The focus is going to be on getting the deal into a better place. There is a sense that this may be the last shot at getting something that might be more palatable. The backstop is still the biggest sticking point,” a source told The Telegraph.

The backstop arrangements have been agreed with the bloc and would come into effect in the event of no trade deal by the end of the transition period to stop an alleged “hard border” between Northern Ireland and the Republic of Ireland.

However, a source close to the environment minister told the newspaper that “Andrea has been reaching out and it looks likely they’ll meet up but there is no pact as such.”

Mrs May and her supporters have been on the defensive since the latter end of the week, not only following the high-profile Cabinet resignations of Dominic Raab as Brexit secretary and Esther McVey as work and pensions secretary, but calls from Brexiteers in the backbench for a vote of no confidence.

On Thursday, chairman of the Tory European Research Group (ERG) Jacob Rees-Mogg announced that he had sent a letter calling for a party leadership challenge to the 1922 Committee chairman Sir Graham Brady, with former junior Brexit minister Steve Baker urging other MPs to do so on Friday after rumours circulated that the magic number of letters — 48 — had already been received.

However, no announcement came officially from the 1922 Committee, and May loyalists have said that she would fight any efforts to unseat her, with others saying that a majority of Conservative MPs would ultimately vote to keep her as party leader.

The Prime Minister has made a series of moves over the past days to bolster public and Tory membership support for her Brexit plans, including press statements, appearing on LBC radio, taking a group call with hundreds of Conservative Pary chairman across the country, and being interviewed by the Daily Mail, a tabloid loyal to Mrs May.

She told the newspaper, “People say ‘If you could only just do something slightly different, have a Norway model or a Canada model, this backstop issue would go away’. It would not. That issue is still going to be there.

“Some politicians get so embroiled in the intricacies of their argument they forget it is not about this theory or that theory, or does it make me look good.”

The prime minister also may key replacements which would stabilise her position, handing the role of work and pensions secretary to ally and remain voter Amber Rudd, who went full-force on the defensive for May, telling the BBC that any MPs thinking of submitting letters of no confidence should “think again.”

“I worry sometimes colleagues are too concerned about the Westminster bubble rather than keeping their eye on what our job is — to serve people.”

Mrs May also appointed little-known former health minister and Leave supporter Stephen Barclay as Brexit secretary — though he will only be in charge of “domestic planning” for the UK’s exit from the EU while Mrs May and Number 10 will continue handling negotiations with Brussels.