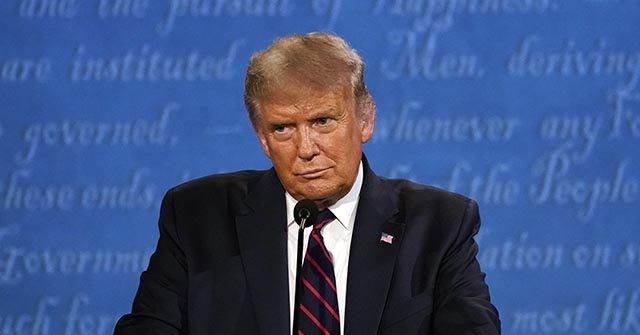 Big Tech has censored President Trump’s social media accounts, as well as his campaign’s, at least 65 times over the last two years, but has yet to touch Joe Biden’s account or the former vice president’s campaign accounts, an analysis from Media Research Center’s (MRC) Techwatch department revealed.

MRC’s Techwatch department looked at social media activity from Trump, Biden, and their respective campaigns from May 2018 to October 16, 2020. According to NewsBusters, the analysis “did not include any ads from PACs or super PACs that had made ads in favor of either candidate” and focused only on social media posts rather than paid advertisements:

Yet they haven’t touched any of Joe Biden’s accounts even once. https://t.co/wu5rlzkxmU

Twitter is the leading offender for censorship such as “labeling, fact-checking, and removing Trump’s tweets and the tweets from his campaign accounts 64 times since the president’s election,” NewsBusters reported.

Last month, Twitter provided warning labels alongside some of the president’s tweets, where he encouraged voters to “go to your Polling Place to see whether or not your Mail In Vote has been Tabulated (Counted).”

“If it has you will not be able to Vote & the Mail In System worked properly. If it has not been Counted, VOTE (which is a citizen’s right to do). If your Mail In Ballot arrives after you Vote, which it should not, that Ballot will not be used or counted in that your vote has already been cast & tabulated,” he said.

“YOU ARE NOW ASSURED THAT YOUR PRECIOUS VOTE HAS BEEN COUNTED, it hasn’t been ‘lost, thrown out, or in any way destroyed’. GOD BLESS AMERICA,” he wrote in the thread.

Twitter’s warning, which blocked visibility to the tweets, stated that the message violated Twitter rules “about civic and election integrity.”

“However, Twitter has determined that it may be in the public’s interest for the Tweet to remain accessible,” the warning added:

We placed a public interest notice on two Tweets in this thread for violating our Civic Integrity Policy, specifically for encouraging people to potentially vote twice. https://t.co/UU9kJfqptz

The month prior, Twitter provided the same warning after Trump stated that mail drop boxes are a “voter security disaster,” which could “make it possible for a person to vote multiple times”:

So now the Democrats are using Mail Drop Boxes, which are a voter security disaster. Among other things, they make it possible for a person to vote multiple times. Also, who controls them, are they placed in Republican or Democrat areas? They are not Covid sanitized. A big fraud!

Just last week, Twitter censored a tweet from the president on his recovery from the Chinese coronavirus. The social media giant accused Trump of “spreading misleading and potentially harmful information related to COVID-19”:

A total and complete sign off from White House Doctors yesterday. That means I can’t get it (immune), and can’t give it. Very nice to know!!!

MRC’s analysis also found Facebook guilty of suppression, censoring Trump and his campaign at least five times, as well as once on Instagram:

Each time, the platform has made the statement that it opposes whatever Trump and the campaign have said or stood for.

A video attacking Antifa was removed from the platform, because it violated the platform’s “organized hate policy” for featuring an upside-down red triangle. The ad asked supporters “to sign a petition and “stand with your President and his decision to declare ANTIFA a Terrorist Organization.” The ad was removed from both the president’s page and his campaign’s page. However, multiple violent Antifa pages that have doxxed members of the Senate remain on the platform, unscathed.

“Straight blocking of URLs was wrong, and we updated our policy and enforcement to fix. Our goal is to attempt to add context, and now we have capabilities to do that,” Dorsey said in an update to the controversy last week:

Straight blocking of URLs was wrong, and we updated our policy and enforcement to fix. Our goal is to attempt to add context, and now we have capabilities to do that. https://t.co/ZLUw3YD887