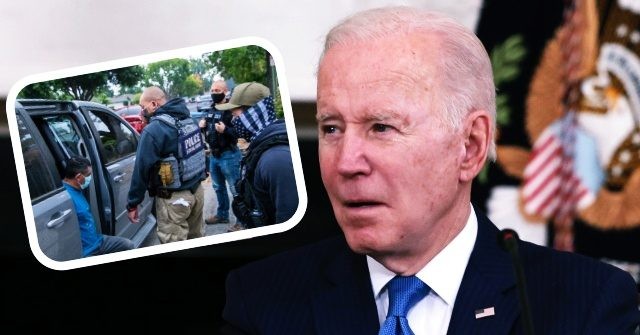 The data, buried in the DHS database and circulated by the Federation for American Immigration Reform (FAIR), gives a glimpse into how Biden’s so-called “sanctuary country” orders helped massively reduce the number of illegal aliens arrested, deported, or released from DHS custody from February to September 2021.

DHS Secretary Alejandro Mayorkas has confirmed in recent weeks that the Biden agenda is “justice and equity” for illegal aliens.

“Unlawful presence in the United States, alone, will not be a basis for immigration enforcement action … it is a matter of justice and equity as well,” Mayorkas said.

As Breitbart News has chronicled, the orders prevent Immigration and Customs Enforcement (ICE) agents from arresting and deporting most illegal aliens in the United States — including those who are accused of killing Americans.

At the apex of the illegal immigration surge that began with the inauguration of President Joe Biden, U.S. Customs and Border Protection were encountering some 7,000 illegal entrants each day, not including the countless number who went undetected, while ICE was averaging just 100 removals.

“For all intents and purposes, the Biden administration has implemented the radical left’s goal of abolishing ICE,” he continued.

One recent case that embodies Biden’s “abolishing ICE” priorities is that of illegal alien Heriberto Fuerte-Padilla who killed 19-year-old Adrienne Sophia Exum in a hit-and-run crash in November 2020.

Exum’s mother, Rhonda, recently revealed that her daughter’s killer is not considered a priority for deportation by the Biden administration. Likewise, Biden is refusing to deport an illegal alien accused of scrawling swastikas in Washington, D.C.’s Union Station.

In addition, the data shows that from February 2021 to September 2021, the Biden administration released about 120,000 illegal aliens from DHS custody. Thousands are convicted criminal illegal aliens while thousands more have pending criminal charges against them. Stein said:

The new data confirms what we already knew: President Biden and Secretary Mayorkas aren’t judiciously enforcing our immigration laws; they are willfully and unilaterally nullifying those laws, in defiance of their sworn oaths of office. In doing so, they are compromising the health, safety, and security of the American people.

The data is only partial and does not include the full immigration enforcement procedures made by the Biden administration last year. Top DHS officials have refused to release that comprehensive annual report.

Research has shown that deportations are incredibly cost-efficient for Americans, as deporting every illegal alien in the U.S. is about six times less expensive than what taxpayers are forced to subsidize for the nation’s 11 to 22 million illegal aliens.