President Joe Biden’s administration has protested to the Israeli government over the alleged conduct of Israeli police during the funeral Friday of Palestinian-American journalist Shireen Abu Akleh, who was shot covering clashes earlier this week.

Akleh, 51, was reporting on an Israeli raid that aimed to arrest Palestinian suspects in the midst of a wave of ongoing terror by Palestinians against Israeli civilians. Palestinian gunmen fired on the Israeli soldiers. Abu Akleh was hit in the neck by a bullet, though it is not clear who fired it, and Palestinian officials have ben refusing to cooperate in a joint investigation.

On Friday, during a funeral procession for Abu Akleh in Jerusalem, Israeli police rushed into the crowd of mourners, and the pallbearers nearly dropped the coffin. The procession had begun far from the assigned route, and mourners in the crowd also unfurled Palestinian flags, in a provocative gesture. 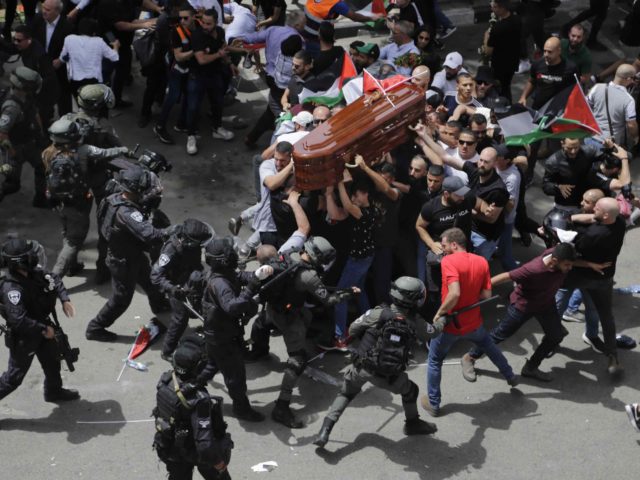 Israeli police confront with mourners as they carry the casket of slain Al Jazeera veteran journalist Shireen Abu Akleh during her funeral in east Jerusalem, Friday, May 13, 2022. Abu Akleh, a Palestinian-American reporter who covered the Mideast conflict for more than 25 years, was shot dead Wednesday during an Israeli military raid in the West Bank town of Jenin. (AP Photo/Maya Levin)

The Israeli police said afterwards that members of the procession had attacked them with stones and other projectiles, but it was not clear if this had happened before or after the initial clashes.

Saturday also marks the 74th anniversary of the founding of the State of Israel on the secular calendar. Palestinians call it “Nakba Day,” marking the “catastrophe” of Israel’s founding, and it is often the occasion for riots by Palestinian activists.

BREAKING: U.S. officials conveyed to the Israeli government a protest about the actions of the Israeli police during the funeral of Shireen Abu Akleh, U.S. & Israeli sources tell me. The sources said there is anger and frustration among Biden administration official over this

Prime Minsiter Naftali Bennett, whose rise last year promised to improve relations between a post-Netanyahu government and a left-wing U.S. government, has been struggling to control the violence and to win the trust of Biden’s Democrats.