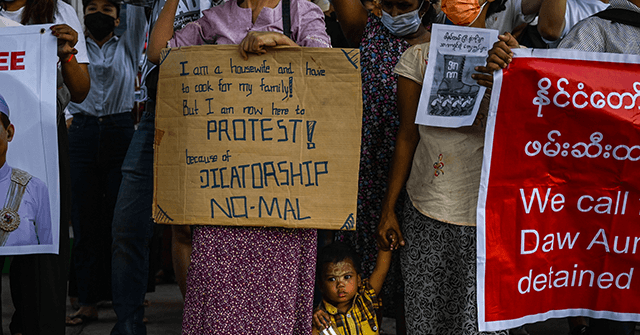 The Assistance Association for Political Prisoners (AAPP), a Thailand-based human rights nonprofit organization, said Friday at least 43 children have been killed during the coup in Myanmar, 15 of them younger than age 16.

The youngest confirmed fatality to date was a seven-year-old girl named Khin Myo Chit, killed when security forces stormed her home. The youngest among the wounded is a one-year-old baby struck in the eye by a rubber bullet.

Another group, Save the Children, called the coup and ensuing political unrest a “nightmare scenario” and said it was “shocked that children continue to be among the targets of these fatal attacks, despite repeated calls to protect children from harm.”

Save the Children noted the “horrifying” detail that many of the child victims were killed or injured in their own homes. “It is clear Myanmar is no longer a safe place for children,” the group concluded.

The U.N. Security Council “expressed deep concern at the rapidly deteriorating situation” on Thursday and “strongly condemned the use of violence against peaceful protestors and the deaths of hundreds of civilians, including women and children.”

The Security Council originally wanted to include a threat of international sanctions in its statement, but the junta’s allies and patrons in China blocked the measure. China also insisted on removing language that condemned the junta for “killing” hundreds of civilians, while Russia threatened to block the statement unless it condemned the death of junta security troops in addition to the deaths of demonstrators, women, and children.

Protesters defiantly insisted they would continue taking to the streets even as the junta expanded its Internet blackout to prevent demonstrators from organizing. On Friday, the junta ordered Burmese providers to shut down wireless broadband, adding to the existing ban on mobile phone data to effectively cut most of the population off from the Internet. Opposition groups responded by devising methods of organizing by radio and text message.

“In the following days, there are street protests. Do as many guerrilla strikes as you can. Please join. Let’s listen to the radio again. Let’s make phone calls to each other too,” a protest leader said on Facebook just before the Internet blackout went into effect.

“Flower strikes,” in which flowers are laid at memorial sites for slain protesters, formed into protest slogans such as “Myanmar Bleeds” and “We Will Never Surrender,” or simply scattered around at random have become popular. Some demonstrators are also using candles to spell out messages. The three-fingered salute from the Hunger Games movies has become a common gesture of defiance.

Foreign governments are protesting the junta’s treatment of their nationals, including a South Korean bank employee shot in the head while riding on a bus this week, and Australian economics professor Sean Turnell, an adviser to elected civilian leader Aung San Suu Kyi, who was arrested along with her and charged with violating Myanmar’s official secrets law.

Suu Kyi has also been charged with breaking the state secrets law, the most serious of five charges leveled against her by the coup. If convicted, she and Turnell could face up to 14 years in prison.

The Australian government on Friday denounced the “arbitrary detention” of Turnell and demanded his immediate release, along with a full explanation of why he was detained and given only limited access to consular services.