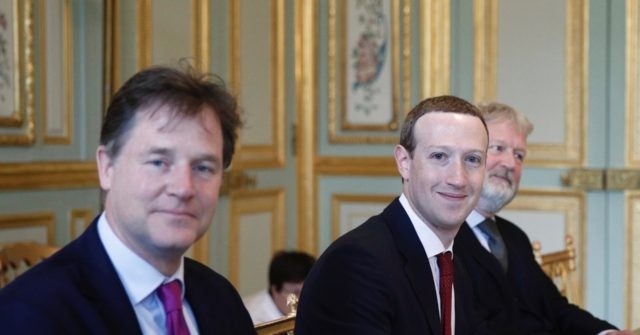 A report in The Telegraph claims that the anti-Trump British politician — who exited the former Conservative-Liberal Democrat government when the latter was trounced in the 2015 elections — was one of several members of the content moderation team who decided to reduce the distribution of the damaging report their site.

While most censorship decisions on Facebook are handled by low-level employees and algorithms, high-profile cases such as the New York Post story are said to be handled by Facebook’s vice president of content policy, then the vice president of global public policy, and, finally, by the former Lib Dem leader.

A select few cases, including posts from President Donald Trump, are reportedly adjudicated by Facebook CEO Mark Zuckerberg and Chief Operating Officer Sheryl Sandberg, although the former deputy prime minister is also said to be in on such top decisions.

Sir Nick became Deputy Prime Minister in 2010 after forming a coalition government with the Conservative Party, then led by the notionally centre-right David Cameron.

Under his leadership, the Lib Dems saw a drastic decrease in support from the public, winning just 8 seats in the 2015 general election, a defeat which led to Sir Nick being ousted as leader of the party. In the 2017 snap election he lost his place in the British parliament entirely, with his constituents voting him out.

Sir Nick spent much of his enforced retirement trying to overturn the 2016 vote to Leave the European Union, but in 2018 he joined Facebook, writing in the left-wing Guardian that he was doing so to help the tech giant “navigate the numerous challenges it faces”, including “the balance between free speech and prohibited content”.

The left-wing former deputy prime minister has a long history of criticising President Donald Trump, even going so far as to join an anti-Trump protest when the American leader visited the United Kingdom in 2018.

Sir Nick said that he was doing so because of Trump’s “crazed attacks on the EU, NATO, and WTO have changed things. Plus his best UK pals are Nigel Farage, Boris Johnson and Piers Morgan.”

“He dislikes everything I believe in and believes in everyone I dislike!” he pronounced.

In September, Clegg suggested that Facebook would actively censor the President should he declare victory in November.

“If Donald Trump or indeed anybody else were to declare victory prematurely before the official results are certified, all users will see a very positive label on that post where that premature victory has been claimed making it quite clear to our users that the results have not yet been officially finalised,” Sir Nick warned.

The decision that was reportedly taken by Sir Nick, amongst others at Facebook, to censor the New York Post article was widely criticised as election interference by many on the political right in America.

As a high-profile political figure in Britain, the Lib Dem’s involvement in the apparent election interference is reminiscent of former British spy Christopher Steele’s role in disseminating disinformation against President Trump and his campaign during the 2016 election.

The censored NY Post article unveiled alleged emails from the son of former vice president Joe Biden, Hunter Biden, which seemingly cast doubt on the Democrat presidential candidate’s previous claims that he has “never spoken to my son about his overseas business dealings.”

According to the emails obtained by the Post, Hunter Biden introduced his father to an executive at the Ukrainian gas company Burisma — which was reportedly paying Hunter up to $50,000 per month to sit on the board of the company — less than one year before then-Vice President Biden allegedly pressured the Ukrainian government to fire a prosecutor who was said to be investigating the company for corruption.

Users on Twitter were blocked from sharing the URL link to the article, and former Democrat congressional staffer turned Facebook employee Andy Stone announced: “While I will intentionally not link to the New York Post, I want be clear that this story is eligible to be fact-checked by Facebook’s third-party fact-checking partners. In the meantime, we are reducing its distribution on our platform.”

Newly obtained emails from a Hunter Biden business partner lay out in detail how the Vice President’s son used access to the Obama administration to arrange meetings for potential foreign clients and investors at the highest levels in the White House. https://t.co/OYbs74fhjV

On Thursday, President Trump suggested that “Big Tech” was censoring the story in order to help Joe Biden win the election in November.

“Now Big Tech, you see what is going on with Big Tech, [it] is censoring these stories to try and get Joe Biden out of this impossible jam,” Trump said, adding: “He’s in a big jam.”

“He and his family are crooked and they got caught and now they’re being protected by Big Tech,” Trump added.

Never before have we seen tech platforms so blatantly play defense for a political campaign as today.

Twitter & Facebook let Russia conspiracies run rampant, but deem an article from a major publication harmful, based on WHAT?!https://t.co/SSmD6ZVJpX