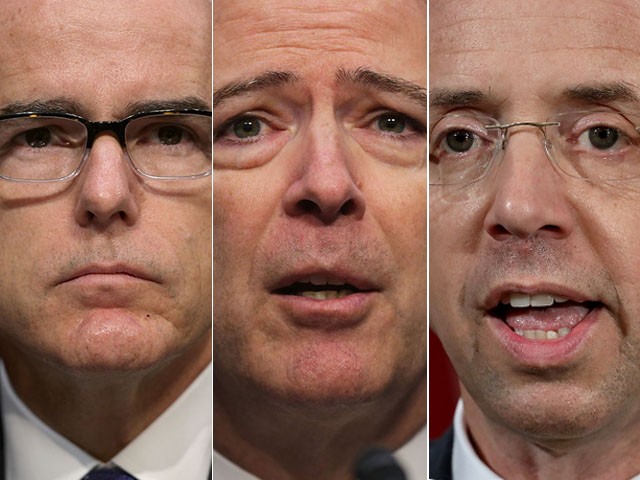 CNN reported Thursday evening that in the days following Comey’s ouster in May 2017, McCabe, Deputy Attorney General Rod Rosenstein, and other leading FBI officials met to discuss how to curb the president from future actions they thought would add to the turmoil at the FBI.

Among the options discussed was Rosenstein donning a wire during meetings with President Trump in an attempt to capture what he believed was manic behavior demonstrated by the president that could potentially be used to convince cabinet members to invoke the 25th Amendment. Rosenstein has vehemently denied the proposition was a serious one and, after several meetings with the president, the Justice Department’s number two official appears to be safe in his position.

The obstruction probe was an idea the FBI had previously considered, but it didn’t start until after Comey was fired. The justification went beyond Trump’s firing of Comey, according to the sources, and also included the President’s conversation with Comey in the Oval Office asking him to drop the investigation into his former national security adviser Michael Flynn.

The new details about the genesis of the obstruction case into Trump that became a key element of the Mueller probe shed light on the chaotic week following Comey’s firing and the scramble to decide how best to respond. They also help to explain the origins of the Mueller investigation that has stretched across 19 months, consumed Trump’s presidency and is building toward a dramatic day of courtroom filings on Friday.

Prior to Comey’s firing, top FBI officials had discussed opening an obstruction investigation based on the President saying to Comey, “I hope you can let this go” when discussing Flynn. That episode was later described in memos Comey wrote following the February meeting that the former FBI director would leak soon after his firing.

On May 17, 2017, the Justice Department appointment Mueller special counsel to investigate Russian meddling during the 2016 presidential election, along with any connections “between the Russian government and individuals associated with the campaign of President Donald Trump.”

“It’s shocking that the FBI would open up an obstruction case for the President exercising his authority under Article II,” President Trump’s personal attorney Rudy Giuliani told CNN.

A press representative for McCabe has yet to comment publically on the report. When asked for comment on McCabe’s obstruction investigation, an attorney for Comey directed CNN to his client’s testimony before the Senate Intelligence Committee in 2017. Comey referenced the matter in his New York Times best-selling book A Higher Loyalty. “We resolved to figure out down the road what to do with the president’s request and its implications as our investigation progressed,” the former FBI official wrote.

Acting on the recommendation of the FBI’s Office of Professional Responsibility, Sessions fired McCabe on March 16, days before the veteran law enforcement official was set to qualify for his pension. “The FBI’s OPR then reviewed the report and underlying documents and issued a disciplinary proposal recommending the dismissal of Mr. McCabe. Both the OIG and FBI OPR reports concluded that Mr. McCabe had made an unauthorized disclosure to the news media and lacked candor − including under oath − on multiple occasions,” a statement issued by Sessions read.

While it’s been months since McCabe left the federal government, the former FBI official’s troubles are far from over.

As Breitbart News reported in September, federal prosecutors impaneled a grand jury several months earlier as part of an investigation into whether McCabe intentionally misled investigators about improperly leaking information to the media.