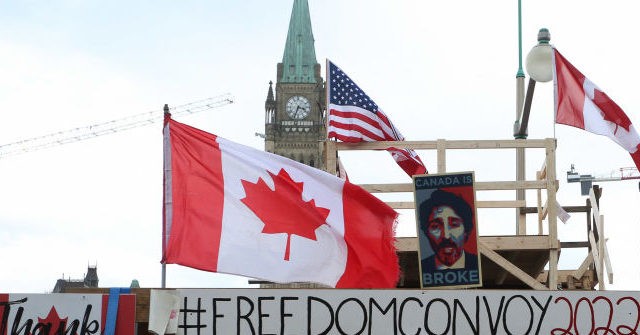 The Canadian Press revealed on Monday that an alleged hack shows the majority of funds to the civil rights “Freedom Convoy” in the country on the website GiveSendGo come from Canada.

The revelation, if confirmed, deals a blow to a campaign by Canadian far-leftists, most prominently New Democratic Party (NDP) leader Jagmeet Singh, to blame the anti-mandate protests on Americans. Singh personally has demanded that leftist Prime Minister Justin Trudeau act to contain the alleged malign influence of Americans in the country and named, among others, former President Donald Trump and Sen. Ted Cruz (R-TX) among the conspirators. Singh has yet to provide any credible evidence for his claims.

GiveSendGo is a Christian-owned funding platform that became the home of the Freedom Convoy’s crowdfunding movement – used to pay for food, fuel, and other supplies to truckers leading the protests – after the larger GoFundMe froze the protesters’ campaign and initially claimed it would donate the money meant for the protesters to charities of its choice in the case of donors who did not specifically ask for refunds. GiveSendGo has stated since it invited Freedom Convoy leaders to use its platform that it has been under consistent cyberattack.

The Canadian Press said it accessed data allegedly showing anonymous donors to the Freedom Convoy via GiveSendGo through a “transparency collective” known as Distributed Denial of Secrets, which in turn states that it “obtained” the data but has not revealed a source.

“The group provided a data set to The Canadian Press and it suggests significant Canadian involvement on top of much-publicized money flowing from the United States,” the news organization asserted.

The data, if accurate, notes only the locations of the donors, not their citizenship status, so it is very possible that the “American” donors are in part Canadians current in America and the “Canadian” donors are foreigners within Canada.

Twitter is allowing information from the alleged leak to spread on their platforms despite policies that explicitly prohibit the spread of such data. Twitter terms of use explicitly ban information obtained via “unauthorized access or interception, or access that exceeds authorization (for example, from an insider), to a computer, network or electronic device, including breaches or intrusions.”

GiveSendGo issued a statement on Tuesday confirming that the website has faced mounting cyberattacks and apparently dismissing the possibility that an employee at the company leaked the donor list. It did not dispute the veracity of information in the Canadian Press report.

“Sunday evening, February 13th, GiveSendGo was attacked by malicious actors attempting to eliminate the ability of its users to raise funds,” the company said. “There was a broadcasted breach showing one such actor illegally hacking into GiveSendGo and distributing the names and emails of the donors of the Freedom Convoy Campaign.”

GiveSendGo’s management asserted that sensitive banking information like credit card numbers was not affected by the leak and vowed to continue hosting the campaign for the civil rights protesters.

“This has not caused us to be afraid. Instead, it’s made it even more evident that we cannot back down,” the company’s Tuesday statement concluded.

GiveSendGo has been hosting the campaign for about a week, following GoFundMe’s announcement, it would no longer allow supporters of the anti-mandate protests on the platform at the request of the Canadian government. A Canadian court attempted to shut down GiveSendGo’s campaign for the truckers last week, but the company ignored its injunction on the grounds that no Canadian court has jurisdiction over any of the company’s activities.

“Canada has absolutely ZERO jurisdiction over how we manage our funds here at GiveSendGo,” the company said in a statement. “All funds for EVERY campaign on GiveSendGo flow directly to the recipients of those campaigns, not least of which is The Freedom Convoy campaign.”

If true, the revelation that Canadians are the top donors to the Freedom Convoy – as is expected given that the protests are happening in their country – deals a blow to the NDP campaign to blame foreigners for the mounting discontent against Canada’s draconian coronavirus-linked civil rights restrictions. The NDP, Singh’s party, launched a petition last week urging Canadians to sign to pressure Trudeau to combat “Trumpism,” which the party leader blamed for the protests.

“Donald Trump, Ted Cruz, Fox News and members of the US Alt-right have also endorsed the convoy,” the NDP’s petition reads, without providing evidence. “Add your name to protect our democracy by shutting down the flow of foreign funding coming from the US.”

Singh himself led the charge to organize an emergency meeting on February 7th to discuss the protests, which at press time has continued uninterrupted in the national capital, Ottawa, for almost three weeks.

“It is clear that this is not a protest; this is an act to try to overthrow the government, and it is getting funded by foreign interference and we need to investigate and stop that,” Singh said at the time, “stop the flow of that foreign interference, particularly coming from the [United] States.”

A poll published this week by the Maru Group firm found that Singh’s message appears to be resonating with Canadians. A majority of respondents in the poll, 67 percent, said they believed the protests were “being heavily funded and supported by foreign interests.” The same respondents offered a grim evaluation of Trudeau’s handling of the protests – only 16 percent said his performance in the job regarding the Freedom Convoy made them want to vote for him, and nearly half said that Trudeau “is not up to the job of being prime minister.”

The Freedom Convoy protests, which have largely consisted of truckers using their vehicles to block international crossings and major roadways, are demanding the lifting of all civil rights restrictions currently in place in the country in the name of containing the Chinese coronavirus pandemic, including vaccine and mask mandates as well as business lockdowns.