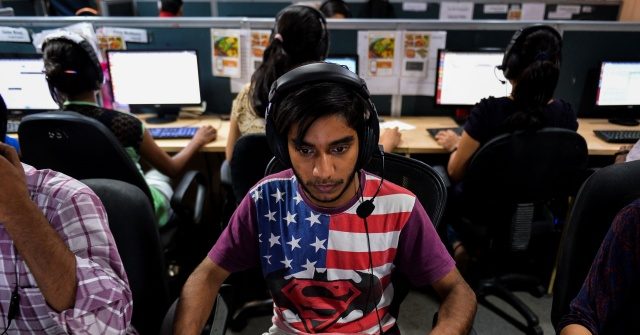 In the middle of the Chinese coronavirus crisis, about 37,000 Americans were notified that their jobs would be sent overseas in outsourcing schemes by corporations, a report reveals.

Analysis by the Guardian reviewed data from the Trade Adjustment Assistance (TAA) program that certifies when American jobs are lost due to free trade. The review finds that from March 15 to July 31, at the height of the pandemic, about 37,000 American workers had their jobs outsourced to foreign countries.

In one outsourcing scheme by Bed, Bath, & Beyond, the retail corporation shut down a call center in Layton, Utah, where nearly 300 Americans had their jobs outsourced to the Philippines. One of the workers who spoke with the Guardian said she and her coworkers had to train their foreign replacements:

“They actually tricked people into training these other people. The way they worded it was they’re bringing the contractor to help out with the overflow. I was never told in any form I was training people to take my job,” said a laid-off call center employee who requested to remain anonymous due to a confidentiality agreement. [Emphasis added]

“For them to make the change with the layoffs, when they did, was the biggest slap in the face for employees. There was no need to do it in the middle of a pandemic.” [Emphasis added]

Outsourcing Americans’ jobs to imported H-1B foreign visa workers is often the first step by corporations in their plans to fully offshore their production and business services.

Every year, more than 100,000 foreign workers are brought to the U.S. on the H-1B visa and are allowed to stay for up to six years. There are about 650,000 H-1B visa foreign workers in the U.S. at any given moment. Americans are often laid off in the process and forced to train their foreign replacements, as highlighted by Breitbart News.

More than 85,000 Americans annually potentially lose their jobs to foreign labor through the H-1B visa program.

Similar outsourcing schemes occurred in the middle of the pandemic with the men’s fashion retailer Brooks Brothers, where the firm shuttered three of its American clothing factories in July and laid off up to 700 American workers.

In Buffalo, New York, more than 400 American workers are seeing their manufacturing jobs with Panasonic outsourced to Malaysia. Likewise, 610 American workers with Asarco, a firm with plants in Hayden, Arizona, and Amarillo, Texas, are having their jobs shipped to Mexico.

At Bedford, Virginia’s Winoa USA, an abrasives supplier, nearly 40 American workers saw their jobs shipped to Canada and France when the company shuttered their plant in June.

In August, General Electric (GE) workers in upstate New York pleaded with President Donald Trump to intervene in their corporation’s outsourcing scheme that will send American jobs to Poland. Their plea came after Trump reversed the outsourcing of American jobs at the federally-owned Tennessee Valley Authority (TVA) where workers were in the process of training their imported H-1B foreign visa replacements.