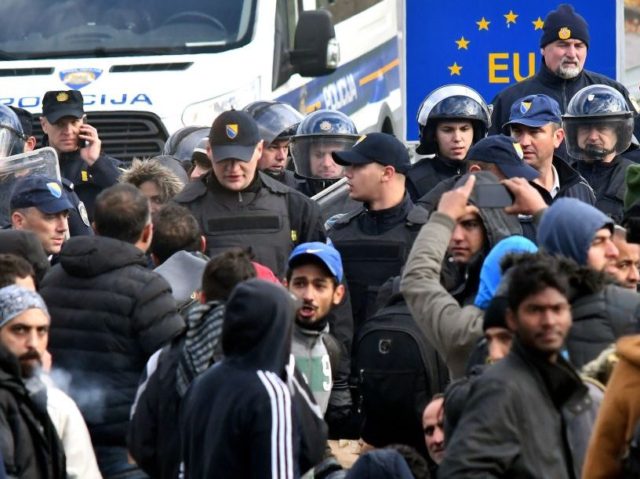 A breakthrough of more than 20,000 migrants preparing to cross the Bosnia-Croatia border and on to European Union (EU) nations is imminent, according to Austrian intelligence, which warns many are “armed”.

Migrant attempts to break into the EU have grown increasingly bold and forceful, with police and illegal immigrants injured in several clashes since the middle of October, when hundreds began camping at the border — reportedly after having been given misinformation that Croatia was set to open its frontiers.

According to Italian news agency ANSA, local media reports the groups send numbers of young people and children towards the police line to chant “open border, open border”, while clashes see mobs of young men charge at police, and throw stones and other projectiles.

“The Croats are trying really hard to handle this alone, and have even positioned special forces in the area”, but authorities in the Balkan nation are struggling to cope with worrying developments at the border, according to sources at the Austrian Interior Ministry reported by Austrian bestselling newspaper Kronen Zeitung.

“More [illegal immigrants] are arriving — there are no more families and there are hardly any women left,” sources at the ministry’s migration department are claimed to have said.

“Ninety-five per cent of these migrants who are trying to break through are young men, almost all of whom are armed with knives. A border policeman has already been stabbed,”  the source said, adding that “the majority come from Pakistan but there are also many Iranians, Algerians and Moroccans”.

In terms of migrants’ maintenance and day-to-day living costs, ministry sources said the supply of provisions to the masses of people was being “fairly well-coordinated”, reporting that many of them have been equipped with prepaid debit cards provided by the United Nations High Commissioner for Refugees (UNHCR).

According to the refugee agency’s website, such cards are supplied to migrants as part of its “programmes for direct cash-aid to the displaced” in cooperation with Mastercard, which in 2016 announced it was distributing prepaid debit cards to provide migrants travelling towards EU nations through Serbia with “mobility, flexibility and dignity”.

While the mainstream media has repeatedly scorned rumours that George Soros is helping finance illegal immigration to Europe and the U.S., Mastercard reported last year it was partnering with the open borders-backing billionaire on ventures to “catalyse and accelerate economic and social development for … refugees and migrants”.

In August, Breitbart London highlighted reports by local media that open borders activists were threatening Croatian police, demanding that officers disobey orders related to protecting the country’s frontiers or else face increasing pressure from foreign NGOs, and the subsequent scrutiny that would follow from global media outlets and the so-called international community.