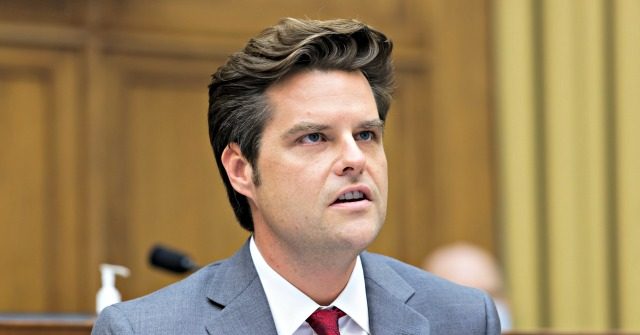 Rep. Matt Gaetz (R-FL) said he was reconsidering whether he should be a cosponsor of the deceptively-named Journalism Competition and Preservation Act (JCPA), after hearing testimony from Glenn Greenwald and others about how the Act would empower many of the Big Media conglomerates that drove Silicon Valley censorship.

“I’m a cosponsor of the JCPA, but after hearing some of the testimony I’m wondering whether I should be,” said Rep. Gaetz, speaking at a hearing of the House Judiciary Committee about the bill.

“Not every failure of every local news entity is a failure of democracy,” continued Gaetz. “Sometimes it’s just bad news. Sometimes the people who work in local journalism are the ones creating, as Ms. Graham described, ‘unsubstantiated clickbait.’ So we cannot view it that way.”

The Florida congressman asked Greenwald if he thought the JCPA would “create more distance between the large media conglomerates… and maybe those smaller independent sites that are maybe also creating good news. Are you worried that by trying to remedy the monopolies in big tech, we create greater challenges [regarding] the monopolies of big media, and make it even harder for independent, gritty journalism to survive?”

Greenwald agreed, warning that journalism was becoming a “very concentrated industry” that was “very similar to Silicon Valley.”

“I do worry about that quite a bit, Congressman Gaetz,” said Greenwald “What we’re hearing is not a kind of idealized or romanticized picture that we might like to think about, of having a diverse and dispersed power throughout the [media] industry where lots of different voices can be heard, but instead a very concentrated industry, very similar in fact to Silicon Valley, maybe a few steps behind it.”

“If you empower this industry without very clear and concrete safeguards… you could very well be essentially accelerating some of the worst industry trends, ensuring that, say, hedge funds that control the industry, or media giants that exert overwhelming power like the New York Times… can further entrench their power through this negotiating force that becomes an antitrust exemption in a way that I’m concerned will exacerbate the problems the subcommittee has correctly identified as a problem, but also forestall the longer-term solutions of dealing with Silicon Valley monopolistic power that is at the root of all of these problems.”

“I think there are reasons why consumers have turned away from journalism. I’m concerned that legislation like this can prevent the self-examination of why journalism has failed so many people, why people no longer trust it and put their faith in it. And I do absolutely believe that the problem of Silicon Valley monopolistic power and its ability to interfere in our politics and impede a free press is a very serious one, but oftentimes it’s the media itself, it’s journalists themselves who are demanding that that power be exercised in a censorious way in a way that undermines a free and diverse press.”

Of the bill, Greenwald said “oftentimes, these piecemeal solutions can make [the problems] much worse by empowering an industry that’s causing many of them in the first place.”