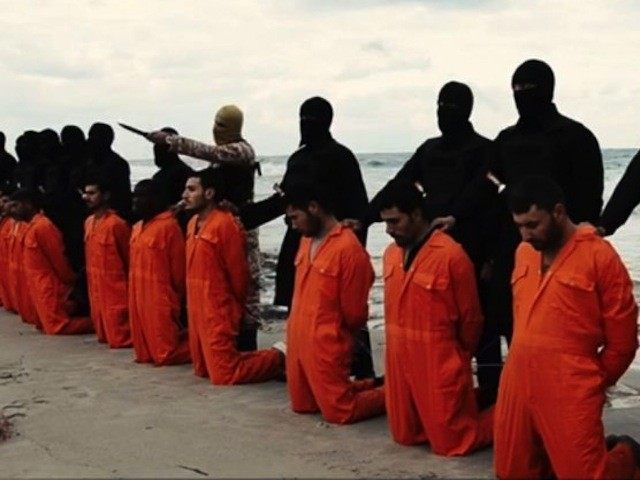 Libyan authorities have announced the discovery of a mass grave containing the remains of 34 Ethiopian Christians killed in 2015 by jihadists of the Islamic State.

The Department of Criminal Investigation of the Ministry of the Interior said this week that the mass grave was found not far from the coastal town of Sirte, in an area that in 2015 was under the control of the armed jihadist group.

In April 2015, the Islamic State released a video showing jihadists beheading 15 men on the beaches of Libya’s Barka Province and another 15 men in the desert in the southern Fazzan province.

The terrorist group claimed the men were “worshippers of the cross belonging to the hostile Ethiopian Church.”

Most of the 30-minute video was a denunciation of Christianity, principally the Catholic Church. It showcased militants destroying Christian churches, altars, and art. Near the end of the video, militants are shown marching the victims to their death. The speaker, dressed in black, vows to kill any Christian who does not convert to Islam.

“To the nation of the cross we are now back again,” exclaimed one masked fighter with an American accent.

The Ethiopian Orthodox Church was legally bound to the Coptic Patriarchate of Alexandria in Egypt until 1959, when it was recognized as Autocephalic (self-ruling) church by Coptic Patriarch Cyril VI. In recent years, the Coptic Church has been the target of attacks by Islamic State militants, in part because they identify it as close to the Egyptian government led by President Abdel Fattah al Sisi.

In February 2015, just two months before the slaughter of the Ethiopian Christians, 21 Coptic Egyptians were massacred by Islamic State jihadists on a Libyan beach not far from Sirte.

The remains of the Egyptian Christians beheaded in Libya were identified at the end of September 2017 in a mass grave on the Libyan coast, not far from the town of Sirte. Their bodies were discovered with their hands still tied behind their backs, dressed in the same orange jumpsuits that their executioners had made them wear.

Not long after the Islamic State execution of the 21 Egyptian Christians in Libya, the Coptic Orthodox Church announced that they would be commemorated in its church calendar as martyrs and saints.

Coptic Orthodox Pope Tawadros II said that the names of the 21 martyrs beheaded by ISIS on February 14 would be inserted into the Coptic Synaxarium, the Oriental Church’s official list of Martyrs, a procedure similar to canonization in the Latin Church.

Libyan authorities said this week that the mortal remains of the Christians will be repatriated to Ethiopia, once the due national and international legal procedures have been complied with.