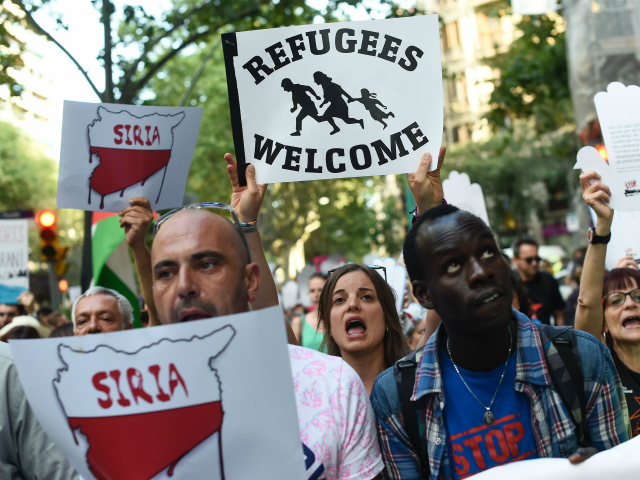 The 22,491 refugees admitted into the United States during the first full fiscal year (FY) of the Trump administration — FY 2018, which ended on Sunday, September 30 — were the fewest admitted in the 38-year history of the Refugee Admissions Program.

The FY 2018 refugee admissions are less than 25 percent of the 84,995 admitted in FY 2016, the last full fiscal year of the Obama administration, and half of the 45,000 refugee ceiling announced by the Trump administration in September 2017 in the FY 2018 presidential determination.

Last month, the Trump administration announced a 30,000 refugee ceiling for FY 2019, which began on Monday, October 1.

Reducing refugee admissions from countries that are “hotbeds of terrorism” was one of the central promises of the president’s 2016 campaign and distinguished him from his Democratic opponent, Hillary Clinton.

“Hillary Clinton was on the record stating we should increase the number of Syrian refugees resettled in the country by 550 percent, from 10,000 proposed for FY 2016 to 65,000 annually. She also signaled that under a Hillary Clinton administration, the annual refugee ceiling would be increased above 110,000–up to as much as 200,000,” Breitbart News reported:

Then-candidate Trump, in contrast, promised the “Trump administration will not admit any refugees without the support of the local community where they are being placed.”

“When I’m elected president, we will suspend the Syrian refugee program and we will keep radical Islamic terrorists the hell out of our country,” he said.

“And we will pause admissions from terror-prone regions until a full security assessment has been performed, and until a proven vetting mechanism has been established,” Trump added.

Trump did not specifically promise to reduce the total number of refugees resettled in the country if elected, but he made it clear that he would not increase that total number, a policy that voters embraced.

In FY 2016, 46 percent of admitted refugees were Muslim, while 44 percent were Christian.