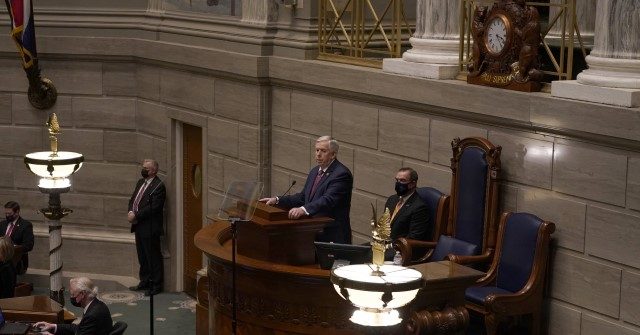 Establishment Republicans in Missouri’s Senate are caving to Rep. Nancy Pelosi’s (D-CA) continued speakership past the November midterms due to redistricting foibles.

While Pelosi maintains the gavel by five district seats throughout the nation, Missouri state Republican senators on Tuesday have filibustered an initiative to nix a U.S. Democrat House seat. The establishment Republicans, who have a supermajority in the Senate, are blocking a redistricting map that would favor Republicans 7-1, instead of 6-2.

“Fourteen Republicans, including Senate leadership, joined 10 Democrats in rejecting the proposal, with members of the Conservative Caucus and Sen. Paul Wieland, R-Imperial, voting in favor,” according to the Missouri Independent.

“Lawmakers face the impending candidate filing period, which begins in a little over two weeks on Feb. 22 and lasts through March 29,” according to the outlet.

The establishment Republicans in Missouri are just one more example of Republicans in state legislatures hindering the GOP from retaking the U.S. House of Representatives.

Gavin Wax, president of the Young Republican Club, told Breitbart News the treacherous deal was made behind closed doors, led by Minority Leader William Barclay. “The maps could have been prevented from becoming law if the 15 Republicans in the Assembly had fought instead of betraying their constituents,” Wax said.

“The betrayal might have set the stage for further defeat in the courts,” Wax continued. “If the 15 Assembly Republicans had fought like their Senate colleagues, we would have had a better chance of defeating these maps in the courts.”

The establishment media has picked up on the Republicans’ lack of willingness to fight for their constituents. In December, the New York Magazine reported that Democrats were doing “weirdly well” in nationwide redistricting battles.

Last week, David Wasserman, senior editor of the Cook Political Report, suggested Democrats have taken a two- to three-seat advantage in the redistricting battle, where Republicans were expected to dominate.

The establishment Republicans have likely been impacted by former President Barack Obama’s one-time attorney general, Eric Holder, who has successfully thwarted Republican state lawmakers via the court system. Holder’s success is a result of his “sue to blue” strategy, which he implemented after Obama took devastating losses in the 2010 redistricting cycle, the Wall Street Journal reported.

According to Politico, about 75 congressional districts in seven states will be settled in the Courts nationwide.